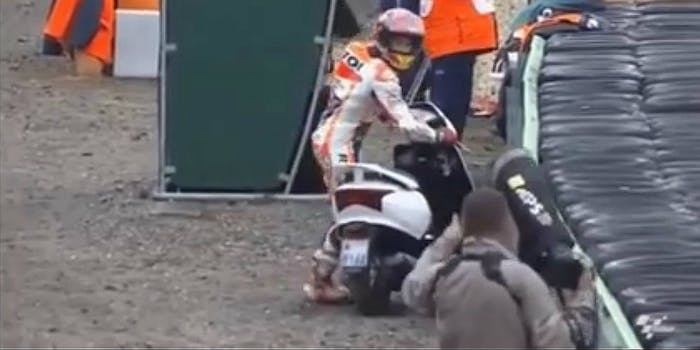 Marc Marquez does whatever it takes to win.

If we’ve learned anything from watching MotoGP races, it’s that riders in the world’s most prestigious motorcycle racing tour can crash the hell out of their bikes and can still find plenty of success. Hell, those riders can even win races after beating the shift gear out of their rides.

And part of the reason these guys can survive the road rash that comes with laying down their bikes on the track and  still perform extraordinarily well in the aftermath is a sense of creativity. And, in the case of Marc Marquez, having the balls to take somebody else’s bike in order to finish up a qualifying run.

Watch him crash his bike while at the TT Circuit Assen in the Netherlands this past weekend, find a camerman’s scooter, get quick permission to borrow it, and then ride it back to the garage in order to get his secondary bike. As Jalopnik points out, Marquez went on to finish fourth in qualifying for the race.

Marquez has had problems with his bike on the course in the past: We’ve watched him climb a freakin’ wall and sprint full-out back to the garage to get his backup in order to finish the race (he actually set a track record in Austin last year, with the fastest-ever speed on that secondary bike).

But using a photographer’s scooter to cut down on the time to get back to his backup—and for the photographer to be like, “Yeah, sure, dude. Whatever. Go ahead and grab it.”—was rather amazing.

“I saw a scooter with a key in it and nobody around,” Marquez said, via the MotoGP website. “When I took it, I saw that it belonged to a photographer, but he let me go. I wanted to get back to the pit as soon as possible, so honestly, I would’ve taken it even if he said no.”