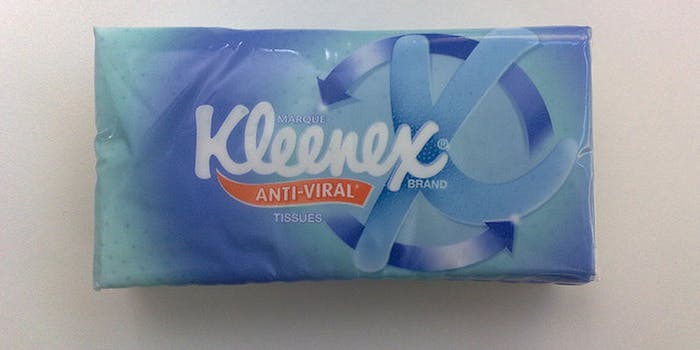 "If I don't supply absorbent paper products, I'm going to find my dish towels hidden in the basement, stiff as aluminum."

Titled “A Mother’s Struggle,” this hilarious Amazon review is probably better than most actual commercials for Kleenex tissues. You can really feel the trauma this everyday mom from a “good Christian home” has to go through to keep up with her three teenage sons’ Kleenex habit.

“I want to start this off by thanking Kleenex for selling these in 36-packs,” writes the long-suffering mom. “I’ve put it on subscription, and if they want to start selling a 72-pack, sign me up. I have three reasons for needing this much Kleenex, and their names are Liam, Samuel and Hank.”

“This used to be a good Christian home. But it’s not about moral judgment anymore. I’m way beyond that. I’m in survival mode. If I don’t supply absorbent paper products, I’m going to find my dish towels hidden in the basement, stiff as aluminum. The other day, I almost cut my hand on a sock. I am sorry to speak so frankly, but with three teenage boys, a woman has got to be practical.

The funny part is, they think they’re being sneaky, with their 45 minute showers and sudden need for ‘privacy”, as if I’m going to walk in on them journaling. They slink around the house like unfixed cats, while I try to announce my location at all times. No one needs to ask me to knock anymore. I knock on the walls. I practically wear a cow bell. I’m not looking to catch anyone by surprise, believe me. I’m just trying to get through this.

The other day my husband was watching me unload the groceries, and he asks me, all sweetness and light, “Honey, what’re you doing with all that Kleenex?”

I about knocked him off his chair.”

The review is so funny that you probably won’t be disappointed to learn that it’s not really true. It seems to have been written by a guy named James Thach, a serial Amazon reviewer whose recent (fake) purchases include Ann Coulter’s latest book and the new John Mayer album. A sample for the latter:  “Since my husband Brad’s unspeakable accident, I have been left with certain needs–for companionship, understanding and emotional fulfillment. And who better to supply those than John Mayer?”

The Kleenex review may have been written as a joke, but it still seems to be resonating with some real moms. As one Amazon commenter wrote, “As the mother of 2 teenage boys this had me in stitches. Best review ever! I think I may actually see if Amazon sells cowbells, awesome idea!”