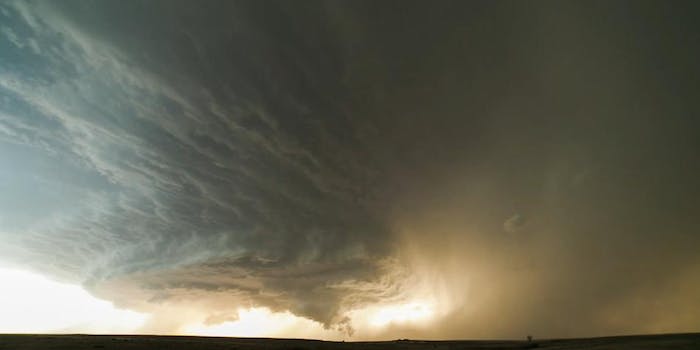 The monstrous storm structure hung over the Texas plains like “something out of Close Encounters,” storm chaser and photographer Mike Olbinski said.

The supercell—the grandest of thunderstorms, capable of creating hail, powerful winds, and even multiple tornadoes—was exactly what Olbinski had searched for throughout the past four years.

“I’ve been visiting the Central Plains since 2010,” creating wrote. “Usually it’s just for a day, or three, or two … but it took until the fourth attempt to actually find what I’d been looking for. And boy did we find it.”

Using a Canon 5D Mark II with a Rokinon 14mm 2.8 lens, Olbinski and his friend Andy Hoeland captured one of the countless storms to make headlines and wreak havoc across the South this year. Olbinski filmed the storm on June 3 in four parts, each time moving to a different location to capture a clear shot from safety.

“Between the third and fourth portions we drove through Booker, Texas, where tornado sirens were going off,” he wrote. “It was creepy as all heck. And intense.”

On Sunday, Olbinski uploaded the time lapse videos to Vimeo, where they’ve been played 214,000 times and received 90 comments. Dutch artist Marinus used the video to create the following GIF animation which has collected more than 4,500 notes.