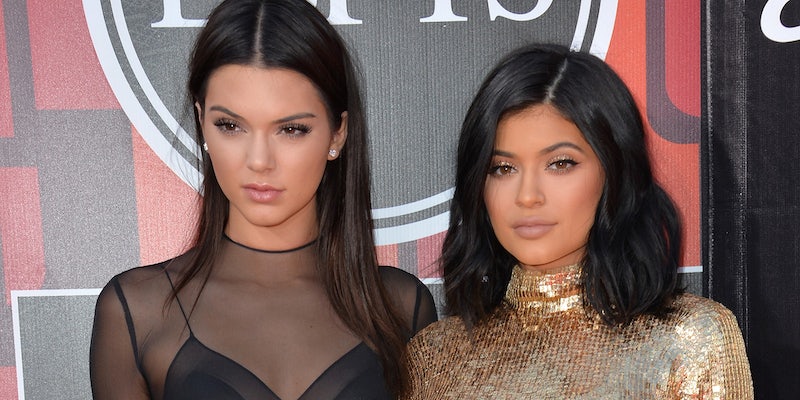 If you can name a more iconic duo, you’re going to love this meme

The Kendall/Kylie backlash is real.

Can you name a more iconic duo than Kendall and Kylie Jenner, authors of young adult sci-fi novel Rebels: City of Indra: The Story of Lex and Livia? One apparent fan of the Jenner sisters is waiting. 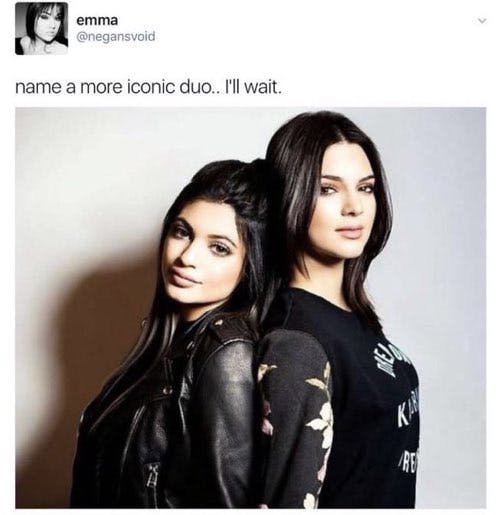 She won’t have to wait long, though, because a lot of people don’t believe the junior-varsity Kardashians deserve a place in history alongside duos like peanut butter and jelly, Woodward and Bernstein, and Romy and Michelle.

Naming iconic duos is now a tremendously popular meme, and no one’s having any trouble with the challenge. It plays well with other recent memes, e.g., Harambe the ape and the boy who fell into his enclosure, or Michelle Obama hugging George W. Bush.

You can also use the iconic duo meme to burn the weakest member of a trio. Poor Michelle.

And some decided to go with icons in the religious sense. I see what you did there:

Generally a pretty good meme, even if the girl who created it now says she was trolling. “Emma” told New York magazines’s Select All that she doesn’t really believe the Jenners are iconic, she just wanted to see how people would react.

Welp, it worked. The tweet was so popular and so widely derided that she had to lock her account. Understandable, considering it’s now been quote-replied thousands of times and Twitter’s infamous harassment problem has reared its ugly head:

iwish u would die and then i could kick u in the face. More iconic duo. Fuckin stupid bitch. Go read a book. Learn something

Meanwhile, others still don’t understand what the hell is going on, or they’re pretending not to:

Here's the thing about that "iconic duo" tweet: I don't know who those women are and need someone to explain it to me

I don't know who the two girls are in this "find a more iconic duo" meme.

The “iconic duo” meme is fun because it created a new template and a fun game—try to think of the most absurd duo you can—but its popularity is driven in part by a loud, angry dislike of Kendall and Kylie that’s far out of proportion to anything they’ve actually done.

You know who loves the Jenner sisters? Teen girls. And, as has been observed many times, grown-ups on the internet love to tell teen girls that the things they like are vapid and pointless.

The meme’s good though. It’s whimsical. Have fun with it. Don’t be an angry, red and nude baby on the website Twitter.com.