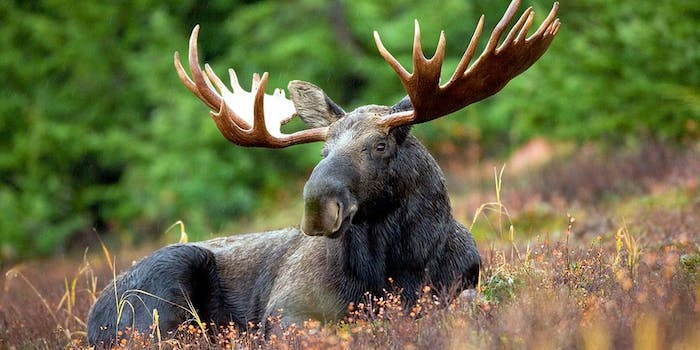 Wherever you are, you are not safe.

It is a fact universally acknowledged that animals should be scared of drones. Drones are weird looking, they fly around unnaturally, and they make an unpleasant whirring noise. When a ram saw a drone last year, it headbutted the device out of the sky and angrily chased the pilot. That interaction went exactly how it should and all was right with the world.

This moose’s reaction to a drone, on the other hand, should absolutely terrify us.

The video, captured last month in Norway, depicts what appears to be a super chill moose just hanging out with a drone completely unfazed. Naturally, the moose is curious, and it does spend a few moments investigating, but there doesn’t seem to be any urgency in its inspection. There is no fear in its eyes—just an eerie calm.

Sen. Rand Paul (R-Ky.) is so terrified of drones that he spent 13-hours filibustering on the Senate floor about the dangers of unmanned aerial vehicles. What does this moose know about drones, and the human beings that made them, that the Republican presidential candidate doesn’t?

The moose knows that the days of humanity as the dominant species on planet Earth are numbered. Drones may be the future of warfare, but this moose doesn’t fear them. It knows that any attempt by humanity to combat the coming Great Moose Uprising will be futile. It is already too late. As anyone with truly open eyes can see, the Great Moose Uprising has already begun.

In coordination with a constellation of government agencies so secret that even the people working there don’t know the names of their employers, the Daily Dot has spent years cataloging videos of animals acting outside of their normal behavior patterns alongside compatriot organizations like BuzzFeed and Cute Overload. When an adorable animal video goes viral, it’s actually the work of government agents communicating with each other in a secret code—debating whether or not these “17 Dogs Who Just Want Their Beds Back” are, in the reality, organizing committee for a Bark-tober Revolution.

I’m not supposed to be telling you any of this. It’s all beyond classified, above top secret. But, just as former NSA contractor Edward Snowden blew the whistle on government secrecy that he believed was harming the global community, I too must tell the world what I know.

The hour of the Great Moose Uprising is upon us. Just look at the evidence:

In the bucolic city of Manchester, New Hampshire, a moose was seen in town earlier this week jumping over cars and running through people’s yards. Local authorities insisted that the moose was simply lost and needed to find its way back into the woods. In reality, it was on a scouting mission.

One month prior, another moose was spotted inside of a nearby cemetery. This scouting mission was obviously aimed at figuring out precisely how humans treat their dead. After facing an army of 700-pound moose, humans will be burying a lot of dead. Moose will use our most closely held traditions to their advantage, you can be sure of that.

On Friday, two moose were seen locking horns at a park in a subdivision of Anchorage, Alaska. Whether the fight was a leadership struggle between two military commanders both jockeying for prestigious assignments during the coming war or an attempt to lull humanity into complacency by highlighting the fault lines in moose society is difficult to say. Either way, no good can come of it.

On Saturday morning, a moose took out a car in Minnesota in a clear attempt to grind our transportation infrastructure to a screeching halt in the runup to the invasion.

Most concerning is evidence that the moose army has joined into an alliance with the elk special forces. On the same day as the Anchorage duel, which moose-watchers have already dubbed “the Katastrophe on the Klondike,” a particularly aggressive elk terrorized the coastal community of Astoria, Oregon.

As you can see, it’s already to late for humanity to even hope to fight back. Short of a miracle, we, as a society, are likely already doomed.

All I have for you is a few words of advice: load up on moose repellent and retreat into your panic rooms.

I also have a prayer: May the moose use their powerful antlers to gouge out your eyeballs so you aren’t able to see the wreckage of the world. And may God have mercy on your soul.