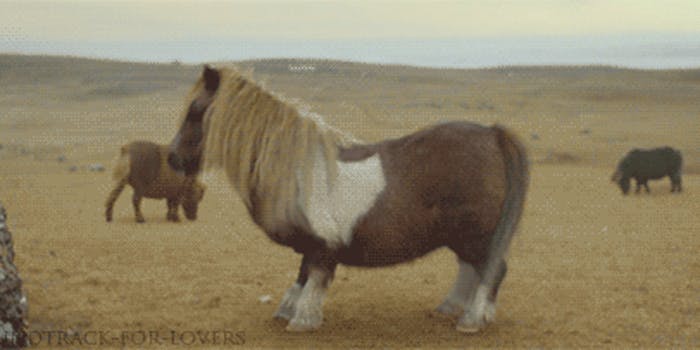 We can’t skip Monday, but we can give you a moonwalking pony

This pony can moonwalk. Your argument is invalid.

Having a rough start to your week? Wish you could rewind and start Monday over again later? Sorry, we can’t help you with that, but here’s a moonwalking pony.

You might’ve noticed we’re pretty big fans of Michael Jackson’s signature move—partially because it’s awesome, but also because it makes a consistently awesome GIF. If you want to make your own, now you can, thanks to an ad campaign by Three.co.uk called The Pony Mixer. Pick a theme (punk, hip-hop, boy band, Bollywood, etc.—editor’s pick: “The Final Countdown”), crank up the groupies, trick out the lighting, and see your pony go.

From there, you can turn your pony’s music video into a GIF with our simple how-to guide—like Tumblr user Soundtrack for Lovers did with this one, to the tune of 51,257 notes—and all of a sudden it doesn’t feel so much like Monday after all. You’re welcome.