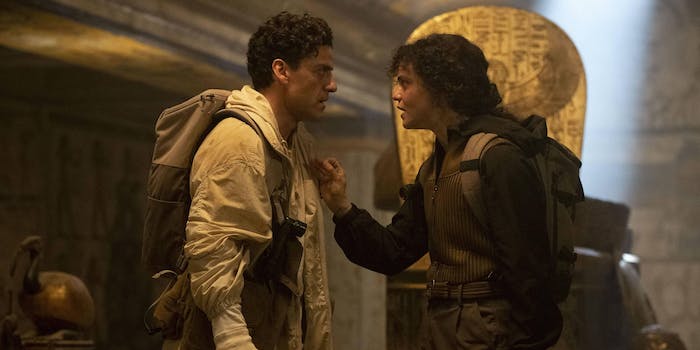 Everyone loves the bizarre final scene of ‘Moon Knight’ episode 4

Literally no one could have predicted this scene.

Moon Knight‘s fourth episode took the show to some drastic new places. Starting off as an adventure-horror story in the style of The Mummy, it segued into a divisive (and familiar) trope for sci-fi/fantasty TV: “Is this whole story just a hallucination?”

Here, Marc wakes up in a mental hospital full of callbacks to earlier episodes, suggesting that none of Marc and Steven’s adventures really happened. Arthur Harrow is his psychiatrist, and Layla is a fellow patient. This would be a rather annoying twist for Moon Knight to drop halfway through the series—and it pales in comparison to the weirdness of Legion, another Marvel show about a superpowered man who is hospitalized for dissociative identity disorder.

The good news is that this mental hospital sequence is probably a hallucination itself. The final scenes see Marc discover Steven locked in a sarcophagus, giving us a very fun double Oscar Isaac team-up—and another hint of Marc and Steven’s unnamed alter, widely believed to be Jake Lockley. And then, in the very last shot, they bump into the most memorable character of the episode: A giant, talking hippo:

This hippo is a cartoonish riff on the ancient Egyptian deity Taweret, a goddess of pregnancy and childbirth. As some Moon Knight viewers may recall, she already got a shout-out in episode 1, with Steven organizing hippo plushies in the museum gift shop.

Taweret’s presence means one of two things. Either she’s a construct of Steven’s mind (because the entire episode takes place inside Moon Knight’s shared consciousness), or this “hospital” is part of the same astral plane where the Egyptian deities typically hang out. We won’t know until next week. For now, though, most fans are just excited to see a talking hippo—a zany and 100% unpredictable cameo for the often-conservative world of the MCU. She’s also a welcome reminder that Oscar Isaac once sang a song about hippos on the Jimmy Fallon show.

This episode was definitely chaotic, but in a good way. Drawing from the zanier elements of the Moon Knight comics, it managed to go from genuine horror (a first for the MCU!) to, well… the hippo. As I said in my initial review, this show is at its best when things get weird, preferably allowing Oscar Isaac to freak out in the process.