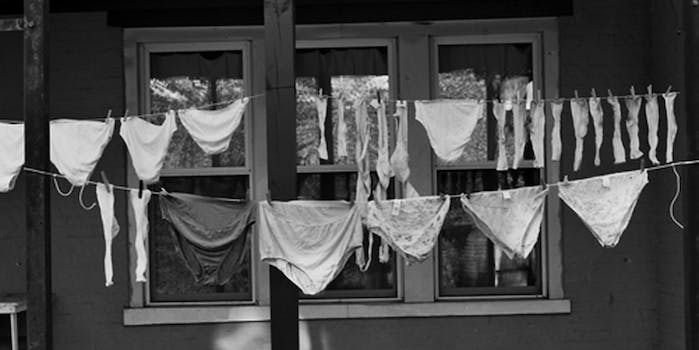 The unidentified man snatches underwear from the clotheslines of women in their 50s and 60s, then sends them photos of himself in the stolen garments.

When all else fails in the hunt for a creepy thief, keep your fingers crossed that the Internet’s sleuths can help track down the perp.

That’s seemingly the hope of Montréal police, who’ve released a YouTube video showing a guy pilfering underwear from a clothesline. He was caught in the act by a victim late last month.

This guy is suspected of a  string of underwear thefts in the Ahuntsic area since last year, and apparently targets women in their 50s and early 60s. In some cases, he’s returned to the scene months later to drop off photos in an envelope of him wearing said delicates. What a charmer.

Reddit‘s r/montreal and r/SPVM (the city’s police force) sections are slacking, having failed as yet to pick up on the scent of the Dastardly Underwear Bandit of Montréal. Twitter isn’t really on the case yet, either.

So it seems, so far, the local population is lacking a certain je ne sais quoi in being motivated to track down this guy. Perhaps the Internet’s detectives might pull on their briefs and plunk down in front of their computers to help out.

H/T The Albatross | Photo via jgh_photo/Flickr