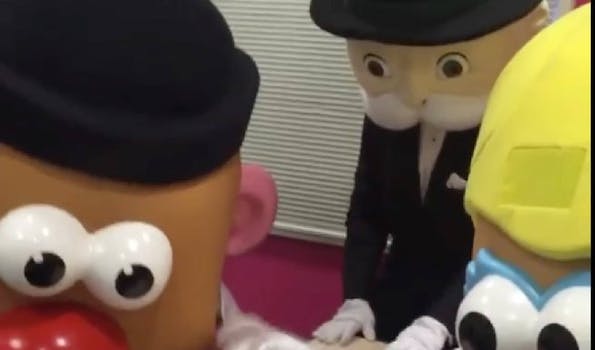 What in the hell is this nightmare Monopoly video on Facebook Live?

What is this I don't even.

While other brands were posting hamfisted tributes to singular musical artist Prince, the social team behind Hasbro’s Monopoly went a different direction Thursday: They orchestrated a Facebook Live event in which a human man defeats two potatoes in a game of dexterity.

Like nearly all previous Facebook Live events, this one was very bad, unless you evaluate it as a musicless music video for Lil Wayne’s classic jam “Got Money,” feat. T-Pain.

In fact, the lack of either music or dialogue is the creepiest thing about it. Without them, all you can hear are the chilling sounds of people dressed as Rich Uncle Pennybags and the Potatoheads slapping hopelessly at another Hasbro property, Hungry Hungry Hippos.

There’s no compelling reason to make this event “live,” because whatever it would gain in suspense—nothing, because there are no stakes—it loses in editing. And a little editing would go a long way here.

These are early days for Facebook Live, and it’s the first time Hasbro has used it. Companies that promote things (so, all companies) have the sense that they should be using Live, but they don’t yet know what to use it for. However, one way to find out is by hurling employees, sometimes interns, at a camera—and seeing which ones stick.

Imagine caring about the outcome of a game of Hungry Hungry Hippos played by Hasbro characters. You can’t. Or, if you can, you can’t do it without being mad that Pennybags gets to use his real hands while the potatoes just have to flail their huge flappers. Come on!

It’ll be really cool when this two-minute video gets turned into a hundred-million-dollar motion picture, though. At least it’ll get a better Rotten Tomatoes score than Ouija did (7 percent).

Hasbro did not respond to a request for comment on whatever this is.