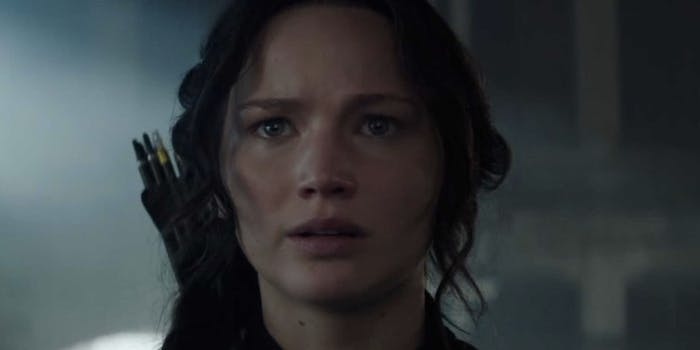 Why cutting ‘Mockingjay’ in half ruined ‘The Hunger Games’

This trend needs to stop.

If you saw the cumbersomely titled The Hunger Games: Mockingjay – Part 1 in theaters this weekend, you may have been part of a historic Guinness World Record-breaking event. Everyone who paid $10 to watch Katniss Everdeen and her merry band of rebels mill about in Hitler’s bunker has now been subjected to the world’s longest act of foreplay: 123 minutes of rub and tickle without climax. For anyone upset that the filmmakers made you wait another year to get off, you knew this would happen—it’s even in the title. “Part 1” is Hollywood speak for blue balls.

The least well-received of series, the first installment of Mockingjay also is set to gross the least. During its opening weekend, Francis Lawrence’s second outing as director earned $35 million less than Catching Fire did, a steep 22 percent drop. Part of this can be chalked up to the lukewarm reception amongst fans of the novels—Mockingjay is considered by many to be the weakest in the series. But for all the hand-wringing over mouth-breathing fan girls, audiences for YA films have proven to be surprisingly savvy in the post-Twilight era. The failures of The Host, The Mortal Instruments, and Beautiful Creatures show viewers know a turkey when they see one, and in splitting Mockingjay into two movies, Hollywood has delivered them one over-cooked bird.

The strategy was widely lauded when Warner Bros. came up with a seemingly ingenious idea in adapting J.K. Rowling’s Harry Potter and the Deathly Hallows. Over the course of the series, Rowling’s writing became increasingly expansive along with the Dickensian scope of her novels; the last entry in the franchise clocked in at a staggering 759 pages. According to Screen Crush’s Matt Singer, this was a wise decision considering the novel’s audience. “Potter fans had proven themselves among the most obsessively loyal in film history,” Singer writes. “They wanted to see everything; every character and set-piece, every bit of dialogue and plot twist. In the case of Deathly Hallows, there was no way to cram it all into a single film.”

But that’s not exactly true. The longest book in the series, Harry Potter and the Order of the Phoenix, spans 870 pages and manages to be the second shortest of the film adaptations. If anything, the Harry Potter films prove that brevity is the soul of storytelling: The least-liked movie is also the series’ longest, the 161-minute Chamber of Secrets. According to Salon, Deathly Hallows Part 1 ranks just ahead of it. For all of Deathly Hallows’ game-changing bipartite structure, Part 1 is also the lowest-grossing of the series in adjusted dollars. The strategy made for one helluva conclusion, but after audiences were forced to sit through two hours of plaintive foot-dragging.

As the box office numbers show, many Harry Potter fans were willing to sit Deathly Hallows Part I out and wait for the finale, a problem that also plagued the recent Twilight series. Choosing to split Breaking Dawn, the fourth book in Stephenie Meyer’s vampire romance saga, into two films delivered the franchise’s worst entry and its best. Part 2 was the campy grindhouse film the series should have been all along, so long as viewers were willing to be tortured by Part 1. In an interview with the New York Times, screenwriter Melissa Rosenberg said she had a difficult time with Part 1‘s script “because it’s a small story,” which is a charitable way of saying the first chapter of Breaking Dawn is really fucking boring. Nothing happens! It’s both the second lowest-grossing entry and the series’ most critically reviled, which is saying something.

There’s a reason that the decision to split your finale into two parts yields such poor results: As Matt Singer explains, it’s not the way movies work. “Dividing a story and releasing each portion separately goes against every axiom of good cinematic storytelling,” Singer argues. “Less is more? You can throw that right out the window. Show don’t tell? In theory, two movies means twice as much opportunity to show stuff, but in practice, it means front-loading the first film with a ton of exposition, where lots of characters tell the audience what’s going on and what they’re feeling in pointless dialogue scenes primarily designed to pad out the movie’s runtime.”

Whereas more running time in Deathly Hallows Part I treated audience members to an extended, dull camping sequence (that, oddly, felt more like Twilight than a Harry Potter movie), Mockingjay Part I feels like Katniss’ reenactment of the “Kim Jong Il Looking at Things” Tumblr. Mike LaSalle of the San Francisco Chronicle puts it best: “The most active thing Jennifer Lawrence gets to do is walk on different piles of rubble and look upset,” LaSalle writes. “First she goes to the rubble that used to be District 12 and looks upset there. Then she goes back there and looks around to get upset again. Later, she walks outside to see the rubble caused by the bombing of District 13. This upsets her, too.”

The result turns Mockingjay Part I into a really expensive hang out movie; like a glorified cast reunion, this has a certain charm, unless you want the story to move along. Entertainment Weekly’s Darren Franich compares it to a “lesser episode of Parks and Recreation”:

It’s the joy of watching a supporting cast hang out, which is very different from the joy of watching actual things happen. In Mockingjay–Part 1, all the action is abstract, distant… Towards the end, the movie stages a grand rescue scene—Zero Dark Peeta—but it comes out of nowhere. That’s a common motif in Mockingjay – Part 1: Someone announces that something is about to happen, that thing happens, and then everyone moves on.

According to Franich, a perfect Mockingjay movie “would’ve been 90 minutes long, tops,” but others have argued that the added run time of two films will “bring to the screen a fuller, more faithful adaptation of the book’s events.” However, faithfulness is not always a boon to cinema; Zack Snyder’s adaptations of Watchmen and 300 were so slavishly loyal to the source material that they looked like comic books onscreen—and ended up dull and inert. As beautifully put in Curtis Hanson’s adaptation of the Michael Chabon novel, Wonder Boys, being a writer is all about making choices, knowing what to keep and what to cut. Mockingjay Part I, like Snyder’s films, simply doesn’t make enough choices, or any at all.

In the case of The Hunger Games movies, it’s not about putting a distinctive stamp on the material. Like a TV director dropping in to helm an episode of an established series, the goal is simply not to break the China—or do anything too flashy to upset fans. This is why YA series have long relied on workmanlike directors to steer the franchise. After flirting with Alfonso Cuaron and Mike Newell, the Harry Potter films gave the reigns to TV director David Yates. After enlisting Neil Burger for its first entry, Divergent gave control of the franchise to Flightplan’s Robert Schwentke, the kind of director who can deliver a movie under budget and on time, in order to keep up with rapid production pace. The Hunger Games‘ Gary Ross wanted too much time between movies, so the ruthlessly efficient Francis Lawrence got his job instead. Sure, Lawrence delivered the series’ best movie (Catching Fire), but rest assured: The decision was less artistic than financial.

If the Hunger Games movies are beginning to look a lot like TV, it’s not just their choice in directors. By extending the films’ runtime and number of entries, YA movies are embracing serialized storytelling, as well as what Matt Singer calls “teaser culture.” “In a world of teaser culture, people enjoy anticipating things—through trailers and speculation and fan-casting and plot predictions—as much as they do actually consuming them,” Singer writes. “If all you want is a gripping, complete story, splitting something like Mockingjay into two parts is disastrous. But if what you really want is to look forward to Mockingjay for as long as humanly possible, then splitting the movie in half gives you twice as much time to stretch out the ride. Hell, why not make it into three parts while you’re at it?”

Much ink has been spilled over whether or not TV is killing movies, and the Hunger Games’ constant fan service represents something of a crisis of confidence. To compete in the digital age, Den of Geek’s Ryan Lambie argues that “movies… have to keep reminding us why they’re unique, and play to their strengths.” Suzanne Collins’ series wasn’t meant to be milked into four parts, and one of the things that make the books so adaptable to the big screen is how well they mirrored cinema narrative. Each book is like its own act, and dividing Mockingjay in half betrays that, as well as cinema itself. Lambie writes, “By releasing three-act stories into chunks, we’re taking a step away from what movies do best.”

Of course, telling a story in two parts isn’t always bad news for filmmakers: Dividing Kill Bill in half helped Quentin Tarantino make two films that stood on their own, as different as they were inspired. Vol. 1 was a blood-soaked love letter to kung fu, a tale of revenge that was equal parts Looney Tunes and Kurosawa; the closing chapter was a spaghetti western as talky as it was spellbinding, featuring some of Tarantino’s best monologues to date. Each of Kill Bill’s volumes represented a different facet of its creator’s personality, as well as a glorious tribute to the filmmakers that helped inspire him. The difference is that while Kill Bill offered the perfect synergy of both sides of its creator’s mind, Mockingjay Part I just feels lobotomized, as brainwashed and zombified as Sleeper Cell Peeta.

Mockingjay’s next chapter promises the rousing conclusion that only three movies of thumb-twiddling can offer: the exorcism of Peeta and the fall of the Capitol, as well as finally giving fans the reach around they deserve. For some, it might feel like the happy ending they’ve been waiting for, but for the rest of us, it just feels like getting blown.