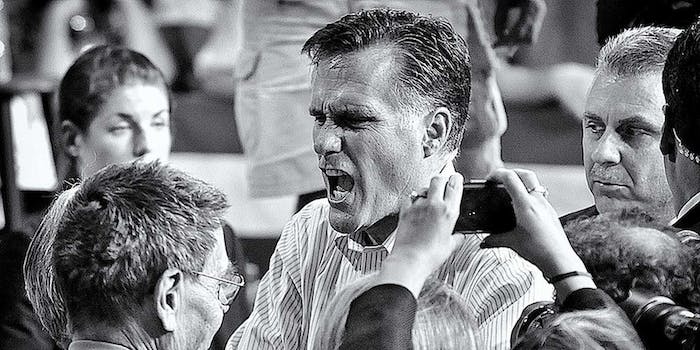 A suspect has been charged in a blackmail scheme that threatened to release Romney's tax records at the height of his campaign.

A much-mocked presidential runner-up and a potentially flash-in-the-pan technology? Just a warning to anyone reading this five years from now, this story may seem a little dated.

A Tennessee man was indicted this week on charges related to his alleged effort to blackmail Republican presidential also-ran Mitt Romney during the height of his campaign, threatening to release the former Massachusetts governor’s tax records unless he was paid a million dollars in Bitcoin.

Michael Mancil Brown, 34, of Nashville, was charged by a federal grand jury with six counts of wire fraud and six counts of extortion, the Department of Justice announced Wednesday.

Seeking to take advantage of the relative anonymity Bitcoin provides online, Brown attempted start a bidding war between the Romney campaign, the former governor’s accounting firm, as well as Republican and Democratic political operatives, according to the indictment.

Federal prosecutors allege that Brown sent a letter to the offices of PricewaterhouseCooper LLC, the accounting firm that handled Romney’s taxes, falsely claiming to have gained access to the Republican nominee’s 2010 tax return. The letter demanded $1 million worth of the digital currency Bitcoin be deposited into a specific wallet in order to prevent the release of the returns. It also invited interested parties who wanted the purportedly stolen tax document released to put $1 million in another Bitcoin account.

Similar letters were sent out to Republican and Democratic campaign officials in Franklin, Tenn. The same message was also posted on Pastebin.com, according to the indictment.

The letters were sent out at a time last summer when Romney faced heavy scrutiny for refusing to release his tax records. Presidential candidates are under no legal obligation to do so, but it has been customary for several decades, and many pundits claim the wealthy candidate’s refusal may have alienated him from the poor and working classes.

A statement from the Department of Justice does not detail why Brown sought payment through Bitcoin, but its safe to assume the cryptocurrency’s anonymity was part of the scheme. Unlike other forms of online payment that are linked to verifiable bank accounts, Bitcoin is essentially a code that is spent like cash online. It fuels all sorts of illegal and semi-legal activities online.

Ideological supporters of the currency are trying to usher it into a more legitimate light, with some success. But schemes like this, along with recent DEA and Homeland Security seizures are making it difficult.

At the time of the original blackmail scheme, the Daily Dot checked the balance of both Bitcoin wallets the blackmailer was operating. They contained 3.72 bitcoins—worth less than $50 at the time but around $375 today.