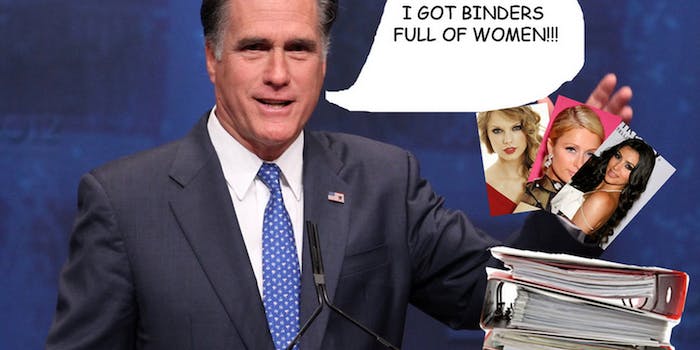 A quick flip through Mitt Romney’s “binders full of women”

Tuesday’s presidential debate is now over, and after 90 minutes of disagreement and discourse between two esteemed political candidates, there’s only one clear winner: Binders and the women that go in them.

That conclusion quickly became the consensus after Twitter downright blew up just a few seconds after the first major idiomatic gaffe of the night, one handled by Republican presidential candidate Mitt Romney in response to a question about the ways in which the two candidates would “rectify the [earnings] inequalities in the workplace.”

Romney decided to answer the question by reminiscing on an instance during his tenure as governor of Massachusetts when he tried to balance out the equation.

“We took a concerted effort to go out and find women who had backgrounds that could be qualified to become members of our cabinet,” Romney said.

“I went to a number of women’s groups and said, ‘Can you help us find folks?’ And I brought us whole binders full of—of women.”

Wait, did he just say he brought us binders full of women? 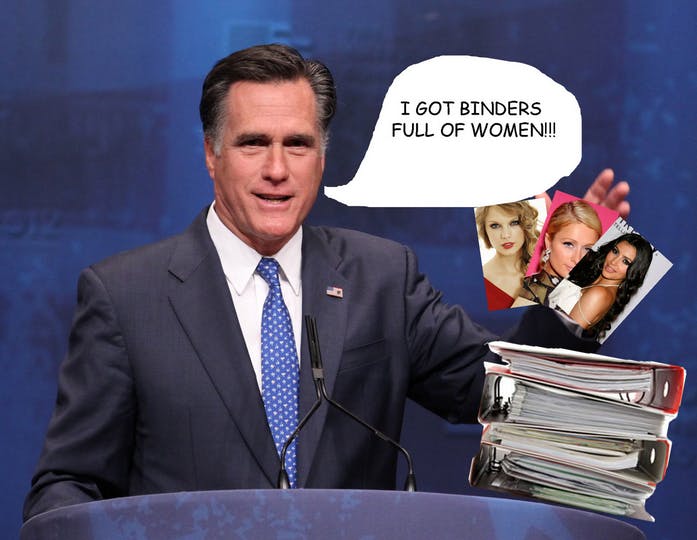 On Tumblr, the big winner was the appropriately named Binders Full of Women, which has become somewhat of a catch-all for all “Binders full of women” jokes, GIFs, and gags that people have created since Romney let the adage slip.

Twitter parody accounts started showing up en masse, with @RomneyBinders, @RomneysBinder, and @Romneys_Binder leading the way. The third may be most prolific and initially successful. The account’s already racked up more than 12,000 followers after only 16 tweets. 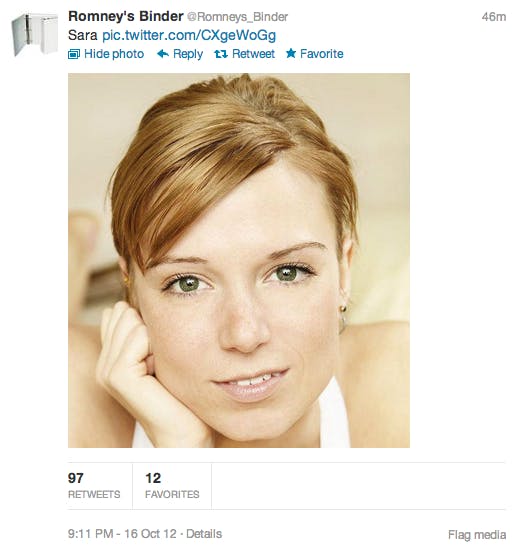 The big winner, in all likelihood, was the quick-witted individual who had the presence of mind to create at the Binders of Women page on Facebook. Launched just after 9pm CT, the page spread like wildfire across the social platform, racking up over 72,000 likes in its first hour alone.

What are those 100,000 new fans (and counting) getting out of the group? Legitimate political discourse. So far, the page’s proprietor has linked followers to a map explaining pay grade differences across the country and a Wikipedia article detailing the Lilly Ledbetter Fair Pay Act of 2009.

With discourse like tonight’s, documents like these may be valuable enough to print out and keep. Hey, does anybody have a binder for all this stuff?