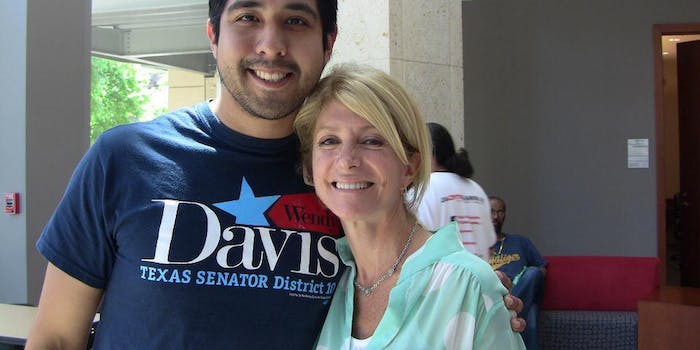 Wendy Davis's 11-hour filibuster for abortion rights in Texas ignited a fire in the hearts of all progressives.

Wendy Davis’s 11-hour filibuster for abortion rights in Texas ignited a fire in the hearts of all social justice–loving, blue-voting, pro-choice progressives. She and her Twitter-organized army of Capitol Building protesters in Austin spoke up, way up, often at top volume, until a vote on the clinic-shuttering measure SB5 was postponed. It was the first crowdsourced filibuster, and it earned Davis a place among the next generation of Democrat heroes. Even her shoes won die-hard fans. People think she’s Connie Britton.

All this to say it’s OK that someone on Craigslist posted a really sweet, not-at-all-creepy Missed Connections ad for the 50-year-old state senator:

Thing is, Wendy Davis’s day wasn’t a missed connection at all, even if, continuing the metaphor, you missed the YouTube stream and tuned in the next day. But blame the TV news media for that. Not a single network picked it up. Countless Americans logged online to find it. We were all connected. Wendy Davis connected us.

Everything else in the news today: