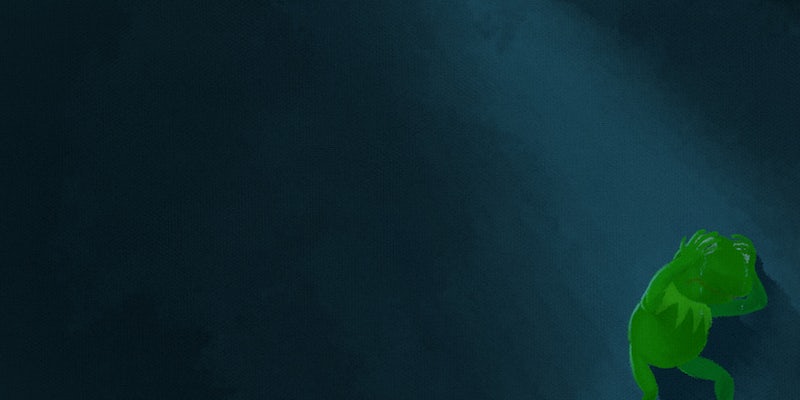 Love is meaningless, God is dead, and everything you thought was OK is definitely not.

It’s an act of conscious un-puppeting. But it’s also an act of sheer cruelty.

On Tuesday afternoon, Miss Piggy tweeted to the world. The statement was one that no one ever thought they would have to read. Miss Piggy and Kermit the Frog, that bedrock of celebrity, felted puppet animal relationships, are going their separate ways.

First of all, a breakup between two fictional characters long beloved by children is the definition of senselessness. It’s unnecessary and tragic, and not amusing or whatever it was intended to be. The termination of Kermie and the karate-choppin’ original feminist is a brutally harsh reality check that basically serves to initiate the end times.

“Our personal lives are now distinct and separate,” wrote Miss Piggy on Twitter (or whatever evil puppetmaster stuck his hand up her felted butt and forced her to compose the worst tweet of all time). “We will be seeing other people, pigs, frogs, et al.”

The puppets will continue to work together on TV, wrote the world’s most famous pig—including the new Muppets series on ABC slated for the fall.

As Jim Henson rolled over in this grave, plagues of bees began to swarm over the desert lands and the sky opened up into bursts of flame. For the breakup between Kermit and Miss Piggy, accompanied by the howling of lost souls flooding upward from the depths of hell, is pretty much the first true sign of the apocalypse.

On Twitter, public outcry ranged from shock and disbelief to denial and ultimately rage as users quickly cycled through the stages of grief.

Others cited the fact that Tuesday was also the birthday of U.S. President Barack Obama—and what a terrible birthday present (or conservative right-wing conspiracy) the announcement had become. One tweeter even equated the puppet breakup (end of times sign no. 1) with Donald Trump‘s actual, improbable rise as a presidential candidate (end of times sign no. 2).

American news media reports Kermit and Miss Piggy have broken up AND Trump leads the GOP field. You may weep now, Greatest Generation.

Despite the clearly impending death of civilization, many tweeters took the announcement as a creepy opportunity to hit on one or both of the newly single puppets.

@RealMissPiggy @KermitTheFrog I was waiting for you to step away from The Frog. My Turn!

Too soon, America. Too soon.