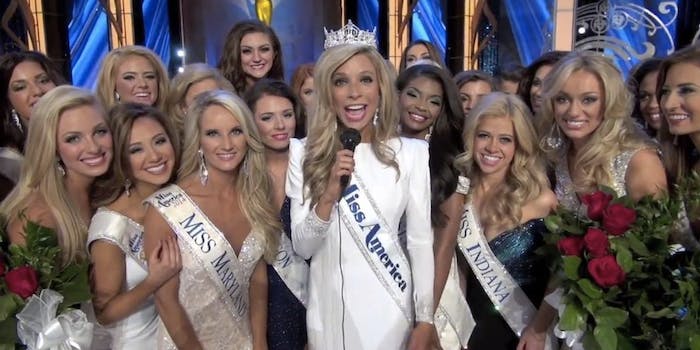 Every year, I read these posts lambasting the Miss America pageant for being sexist, lame, irrelevant, and outdated, and the contestants themselves for being little more than a dumb person’s idea of ideal American femininity, anthropomorphized celery stalks liberally smeared with self-bronzer and Bonne Bell purple eyeshadow. And I agree with them, to some extent. (That flip-cup rendition of “Happy” wasn’t stellar, let’s just leave it at that.) But mostly they just make my eyes roll into the back of my skull.

Really, guys? Miss America is the problem? Miss America is the apotheosis of our society’s hatred of women? With all the industries in our society that are legitimately degrading to women, with the NFL endorsing domestic abuse and the fashion industry encouraging 14-year-old Ukrainian girls to starve themselves to death and Wal-Mart paying their female employees earning less than men for stocking the same shelves and stacking the same boxes, are we really going to say that a bunch of women parading around in hideous Bob Mackie gowns are the biggest problem we, as women, have to deal with in society?

With the exception of the swimsuit competition, which I agree is embarrassing, outdated, and contrary to the stated values of the Miss America competition, I don’t think Miss America is particularly sexist; in fact, I think it celebrates female achievement and independence way more than anyone gives it credit for—or certainly more than the aforementioned industries do. But my opinion could be colored by the fact that I’ve watched Miss America pretty much every year since I was six, a tradition started by my mother that has carried on into my feminist adulthood.

When I first started watching, the appeal was pretty much the same as it would be for any child: pretty ladies with Vaselined teeth and blindingly bright gowns gliding down catwalks, looking the epitome of a specific, highly conventional type of feminine glamor. But when I got to college and had my standard liberal arts intersectional feminist awakening, one day I googled Miss America pageant requirements on a whim and realized I appreciated it for other reasons as well.

Although Miss America started out in 1921 as an Atlantic City promotional campaign to get tourists to stay on after the summer season, it officially became a scholarship competition in 1945, with the organization offering five thousand dollars in scholarship money to winner Bess Myerson. (Myerson was elected the first Jewish Miss America at a time when American Jews were considered second-class citizens. Although none of the pageant’s sponsors wanted her for their products, her win was widely considered a triumph against cultural and global anti-Semitism, making her one of my personal childhood heroes.)

Since then, Miss America has given scholarships to contestants at every level of the pageant, marketing itself as a celebration of academic achievement first and a beauty pageant second. To critics of Miss America, this might sound like mealy-mouthed propaganda, but if you look at the numbers alone, it’s hard to dispute the value Miss America places on female academic achievement. According to its website, last year Miss America gave $45 million to 12,000 women competing not just at the national level, but at the state and local levels as well. The foundation has also created special scholarships for contestants entering the STEM field, which last year’s winner, Nina Davuluri, integrated into her platform.

When she won last year, Davuluri became the first Indian-American to win the Miss America competition. Her ethnicity led to her being branded as a Muslim “terrorist” on social media, presumably by the very same audience that people associate with the competition’s target demographic—beer-swilling, NASCAR-watching racists who think women belong in swimsuits on podiums instead of in the workforce.

I have no idea if this audience actually is the lion’s share of Miss America’s target demographic (though judging by the fact that the competition aired on Country Music Television for years, I wouldn’t be surprised if it was), but I do know that throughout the pageant’s history, they’ve made no attempt to cater to that audience. By electing Myerson as the first Jewish Miss America in 1945, Vanessa Williams as the first African American winner in 1984 (despite the network being barraged with death threats and hate mail), and now Davuluri, the Miss America competition has continuously demonstrated its refusal to cater to reactionary sentiment—despite the fact that it’s so often accused of being reactionary as well.

Watching Miss America and declaring the competition archaic and the women competing shallow and vapid might fit snugly into a liberal feminist worldview, but it’s inaccurate and offensive. Davaluri is a University of Michigan graduate with a degree in cognitive science. This year’s winner Kira Kazantsev is a Fordham Law School enrollee and domestic violence survivor who spoke eloquently about military sexual assault prevention during last night’s Q&A portion. To mock these women as vapid is just as offensive as judging them based on how they look in a string bikini.

So let’s not wait for September to roll around so we can sit around our laptops and make fun of Miss Kansas’s ventriloquism, or Miss Idaho’s performance of “O Sole Mio” on Tupperware again. Or if we are going to make fun of them, let’s make fun of them for the right reasons: Because they’re silly, not because they’re part of a ceremony that we find outdated and antithetical to our worldview.