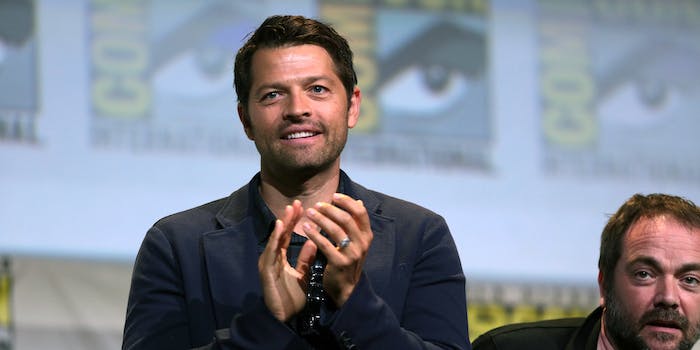 He debunked conspiracy theories about secret unaired versions of his final scene.

In the wake of conspiracy theories that Supernatural filmed unseen material for one of its final episodes, actor Misha Collins just posted a straightforward denial.

This arrived shortly after a fandom-wide furor over the show’s Spanish dub, which offered a different version of Misha Collins’ farewell scene as the angel Castiel. In the original English episode, Castiel confesses his love to Dean Winchester and then dies, and Dean’s response is ambiguous. But in the Spanish dub, Dean reciprocates his love.

This discrepancy caused a huge controversy in Supernatural fandom, where many fans have been rooting for Dean and Castiel to become an official couple. Theories were already brewing about alternate versions of Castiel’s final episode, echoing similar unverified rumors about an unaired “secret episode” of Sherlock in 2017. The Spanish dub just added fuel to the fire, with fans theorizing that it reflected an earlier draft of the script: a more explicitly romantic scene that was cut from the English version. But according to Misha Collins, “there was no conspiracy.”

In a video post and Twitter thread, Collins voiced his support for Supernatural fans, expressing sympathy for those who were disappointed by the show’s ending. But he also debunked the conspiracy theories, writing:

“There was no conspiracy within the network, staff, or cast of #SPN to minimize or erase representation from the narrative & there was no alternate ending to 15.18. Dean was always too stunned in the moment to reply. (Apparently a rogue translator penned their own dialogue.)

Also, in my opinion Cas doesn’t play into the ‘bury your gays’ trope. His declaration of love saves Dean, enabling Sam & Dean to save all of humanity. And Cas doesn’t die! He actually goes on to rebuild heaven!”

He also expressed some ambivalence toward his character’s final scenes, saying: “Was the show perfect? No. Could Cas’ departure have had more resonance in the final episodes? Sure.”

However, he also said he was proud that Castiel’s final message was one of love and self-expression.

Of the show’s three leads, Misha Collins is the most active on social media. Neither the CW nor Jensen Ackles (who plays Dean Winchester) have commented on the controversy, so Collins’ tweets are the closest thing we’ve seen to an official statement. Showrunner Andrew Dabb hasn’t commented either, but he did tweet a photo that seemed like a veiled insult toward the show’s fanbase: