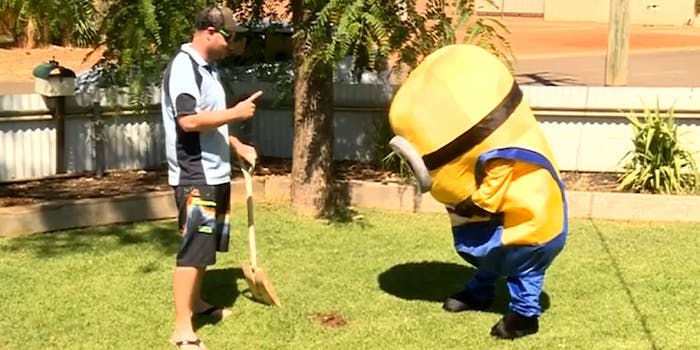 The Minion vandal revealed his identity.

Brad Nicklin, a man in Kalgoorlie, Australia, was already confused when he noticed a square patch of grass was missing from his lawn. But that was nothing compared to how he felt when he checked his home security footage.

“I noticed it was done with a shovel, not an animal, so I went through the [home security] cameras,” he told WAtoday.

The video clearly shows someone dressed as a Minion, the lovable gibberish-speaking character from the Despicable Me films, perpetrating the crime.

"DESPICABLE" ACTA despicable act has been caught on CCTV. Security vision shows a prankster, dressed as a minion, digging up a patch of grass from the front garden of a South Kalgoorlie home. And now the householders want answers.

To add insult to injury, the thief created a facebook page called “Carl Minion” to taunt the victim.

He posted a picture of himself with the stolen grass.

He also posted a short video where he’s watering a sad-looking lawn.

The theft and taunting video followed a Snapchat post in which Nicklin boasted about this beautiful lawn.

“I’ve got a funny feeling it’s one of my mates,” Nicklin said, “because I sent a Snapchat earlier that weekend saying how good my grass was.”

Turns out he was right. Nicklin’s friend Alex Newman, who appeared in the original video claiming to be curious about the thief’s identity, finally came forward to admit it had been him all along.

UNMASKING THE MINIONLast week GWN7 News brought you a story about despicable act caught on CCTV of a minion stealing a patch of lawn from a South Kalgoorlie home. We can now can tell you why it happened, as we unmask the minion.

After revealing himself as the perpetrator, Newman, who told local GWN7 News he didn’t want to get “too famous,” helped his friend repair the vandalized lawn.

The two mates then patched up their friendship over a beer.

Everybody loves a happy ending.