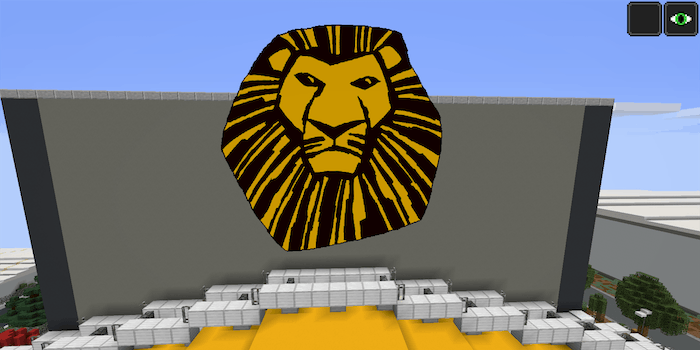 What started off as a simple fan project quickly evolved into something bigger.

In Minecraft, anything is possible. Since its launch in 2009, Microsoft’s simplistic but deeply enthralling sandbox experience has allowed anyone with an imagination to create whatever they desire. With over 140 million monthly players using basic building blocks and the game’s suite of tools, they’ve been able to build real-world monuments, roleplaying shows watched by millions, and even a working computer.

Though those may be impressive, only one community of Broadway enthusiasts has managed to replicate the razzle-dazzle of show time in a virtual space, allowing attendees to experience a version of the metaverse unlike any other.

The Lion King musical is one of the most successful theatrical productions of all time, taking Disney’s classic animated film inspired by Hamlet and combining it with outlandish theatrics (and puppets), the show has appeared in over 20 countries and has continuously run since 1997. When I was six years old, my parents took me to see the play on Broadway, though unfortunately, it was from the highest seats in the back row. I distinctly recall struggling to see the ornate sets and fanciful puppets, leaving me with an incomplete memory and an itch only Simba could scratch.

But over two decades later, I got the opportunity to rectify this after the TikTok algorithm recommended me a video from the German group ORGG Studios. They had built a one-to-one replica of the entire Lion King musical inside Minecraft that anyone could come and watch. So I quickly secured my ticket, downloaded the needed mods, and joined their server.

My avatar spawned off a boat next to a complete virtual replica of the Theater im Hafen, located off the Elbe River in Hamburg, Germany. In the real world, Disney’s puppet-propelled play has been performing in Hamburg since 2001 with over 6,000 performances.

Soon, ushers in headsets led users in tuxedos and anime bikinis to their virtual velvety seats to prepare for the performance. As the lights went down and drummers started beating from the sides, puppet elephants, cheetahs, giraffes, and antelope started to walk through the aisles. Over the next two hours, I watched in abject awe as lights dazzled, sets moved, and Simba became the rightful king of Pride Rock. None of these characters were being performed live, instead they were programmed by behind-the-scenes puppeteers.

Behind-the-scenes of the production

Two German 21-year-olds managed to recreate the magic with painstaking detail inside the world of Minecraft. The show itself, which combines both the theatrical and movie soundtracks, can only be attended by a select few (mostly because the game would crash with more bodies in the seats).

“I have a really big passion for the Lion King musical,” show director Arne told Passionfruit. “With theaters closed in the pandemic, we wanted to give an alternative and new way to watch the show.”

The show’s inspiration came in 2018 after Arne had watched a behind-the-scenes YouTube video of the play. Remembering how he felt watching the production as a kid, a wave of sincere passion to watch it once more struck him like Rafiki’s stick. But there was a problem: the Hamburg theater was too far away, tickets were expensive, and the animated movie wasn’t good enough.

And as if Mufasa himself spoke down from the stars, Arne came up with an idea. He was going to recreate the Lion King musical, in as much detail as possible. So he contacted his lifelong friend Gerome, who had been his partner on other Minecraft projects, about his wild idea and he gladly agreed to join.

“It was a project just for myself,” Arne said. “I didn’t plan for anyone but us to see it.”

Over the next six months, the pair would create the first version of their show: complete with detailed sets, costumes, puppets, and a full-scale replica of the Hamburg theater. This required new textures, models, animations, and skins that all had to be made by hand.

What started off as a simple fan project quickly evolved into something bigger. Since then, they’ve performed 18 shows, recently celebrating the two-year anniversary of their first.

Recreating the puppets in the Lion King was complex, requiring the addition of extra moving limbs, flapping wings, and craning necks. Arne created over a dozen models in just under a week, designing them to move like their real-world inspiration.

The actual play is run entirely by the Blockbuster mod, a program that allows players to create any action in the game and allow it to playback.  Players can perform an action, like jumping, running, or pressing a block, and an NPC, or non-player character, will appear and recreate the action.

Before the first performance, Arne ran through the play as each individual character, keeping pace by listening to the soundtrack. That’s dozens of different performances practiced meticulously to make sure it all properly fits. On top of that, there are also extra roles you’d see in a play’s production, like a conductor waving a wand above the orchestra pit, to fully immerse theatergoers.

“Instead of having to code all these lines with all of these specific timings, essentially doing it the boring way, all you do is just run through the show as one person,” Gerome told Passionfruit.  “It’s always amazing when people realize there aren’t real people on stage.”

What lies below the stage is a mechanical marvel. Thousands of command blocks that can perform simple functions and control different pieces of the moving set and lights. During the performance, a crewman NPC (which Arne previously set up) presses buttons that activate the blocks below, creating a Rube Goldberg machine that ends with wildebeests running or grass floating across the stage.

But the show still has to deal with some major pitfalls. The soundtrack being used is entirely owned by Disney, and the House of Mouse could choose to shut down production at any moment. The shows themselves are sometimes live streamed on Twitch but never put entirely on YouTube, because the platform’s moderation system flags it every time.

“Disney can still show up every time and send us an email and tell us to shut down, which we would instantly do,” Arne said. “As soon as they see a threat in us, it’s not like we are safe because of our server. It’s us showing stuff we don’t own.”

This production is just a piece of the much larger Minecraft theater community. Other Minecraft directors have run plays like Shrek the Musical, Aladdin, or Six. Zach, who goes by HipHopZoo online, has directed four full-length musicals in Minecraft, using real actors with their own vocals in hundreds of performances.

Zach’s performances of shows like Mean Girls and High School Musical were done entirely in the base version of the game, without any mods or fancy add-ons.

“I always wanted everybody to have an opportunity to see the shows,” Zach said. “I wanted anyone and everyone to have access to view and be a part of these productions without having to be able to run heavy hardware.”

It’s what makes these performances so truly amazing. The amount of passion and drive necessary just to put one of these together is staggering. All for what is guaranteed to be non-monetizable. Still, it hasn’t stopped this small but flourishing scene from performing.

“Whenever we talk with friends about what we did last weekend, I always feel a bit uncomfortable,” Arne said. “It’s a movie for seven-year-olds. I feel shame for just a few seconds because after that they are amazed at what the show is.”