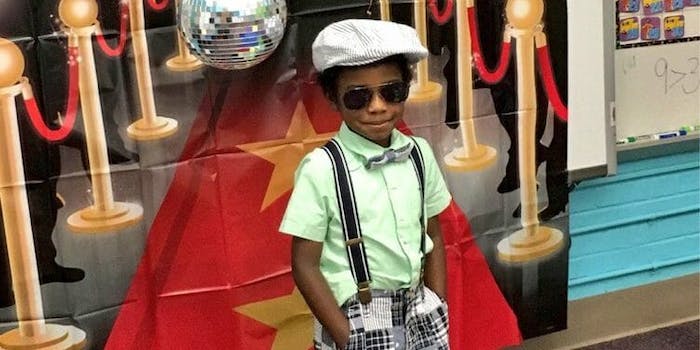 These kids are superstars.

Britt David Magnet Academy in Columbus, Georgia, holds an annual “Millionaire Bash” to celebrate kindergartners who read 1 million words during the school year. The kids get dressed up, arrive at school in a limo, and sign autographs for the assembled parents. This year, one millionaire kid in particular is going viral after his uncle tweeted out photos of his sweet outfit.

Shoutout to my nephew. His school had a "millionaire bash" for the kids that read over a million words in the school year. Celebs for a day. pic.twitter.com/hy40v5OzKP

Stunting on everyone and looking like a young Andre 3000 in his hat, bowtie, and suspenders, this kid has everyone on Twitter envious of his ensemble.

his outfit is everything…no pictures no pictures please! wave to the camera.

The event is a tradition dating back years. Former Britt David students, now in college, look back on it fondly.

How impressive is a million words, really? Very! A million words is roughly the first three books of George R.R. Martin’s lengthy A Song of Ice and Fire series. Considering only half of American adults manage to read five books in a year, that’s a big achievement for a kid. And lest you think it’s easy to cheat the system, the dapper millionaire’s uncle tweeted that the students are quizzed on the books they finish.

Yeah. A.R. books.. they read em and then have to take a quiz on them https://t.co/O0BzuiNPN3

With that kind of literacy and fashion sense, this bunch of young kings and queens has a bright future.