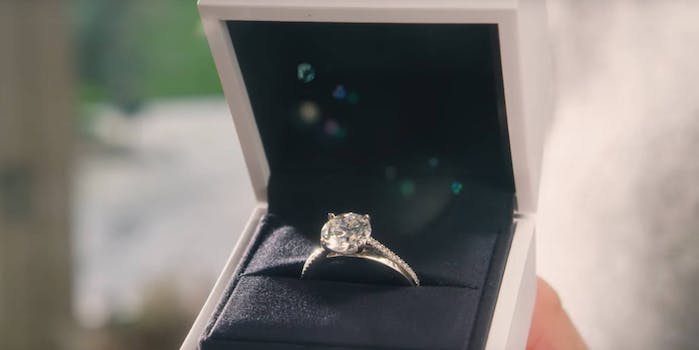 I can't think of any reason.

The Economist, the venerable finance magazine that Karl Marx once called “the European organ of the aristocracy of finance,” is apparently unaware of the economic circumstances of people under the age of 30—millennials, if you must. “Why aren’t millennials buying diamonds?” the Economist wondered this week.

It seems the magazine has found an answer: “Young consumers increasingly shun the taint of conflict and exploitation, and middlemen have been hit as banks balk at gemstones’ untraceability.”

I wonder, though: Could there be some other reason that millennials, many of whom graduated during the financial crisis of 2008, aren’t buying ludicrously expensive precious gems? Let’s investigate, because the Economist sure didn’t.

.@TheEconomist we all work at Verizon and Lids at the mall.

I work at a grocery store

This is interesting. There seems to be an overwhelming sense of financial distress among 20-somethings. Maybe we’re onto something here—something almost compelling enough to discuss in a financial publication!

Does the Economist have a solution to the challenges plaguing today’s non-diamond-buying youths? Oh, indeed! And it’s … lab-grown diamonds:

Laboratory-made gem diamonds, grown using a technique called chemical vapour deposition, are emerging as rivals; these near-perfect crystals bear none of the messy ethical implications of the mined stones.

Bravo, problem solved. My eyes just rolled so hard that they ended up on top of my head, where they were snatched by a passing bird. Thanks, Economist!

This is almost as bad as the time, just last year, that a number of financial writers wondered why millennials weren’t buying houses and cars, and determined that these crazy kids just had different priorities.

Makes sense. I mean, it couldn’t be that previous generations of Economist-reading free marketeers bollocksed up the economy and the housing market so horribly that owning a home is a pipe dream for today’s college grads. That’s crazy.