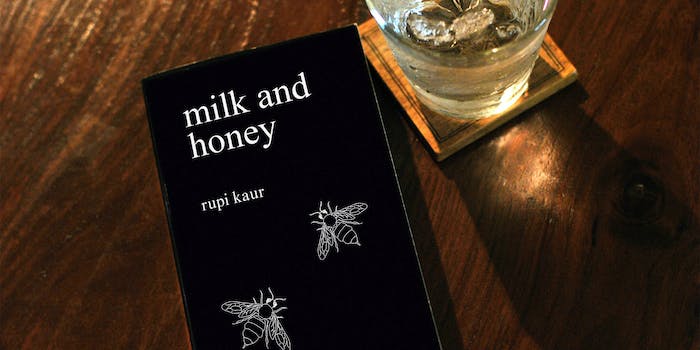 These ‘Milk and Honey’ memes turn Vines into works of poetry

This wildly popular poetry book is now a great meme.

Milk and Honey, a collection of poems by 20-something Canadian social media personality Rupi Kaur, has received a huge amount of exposure since its release in 2016. It’s basically the only contemporary poetry book you can buy on sale at Target. And, as with anything popular, Milk and Honey is facing an inevitable backlash. It has also become a meme.

There’s a growing trend of taking absurd quotes from the defunct video site Vine (R.I.P.) and using Photoshop to pass them off as pages from Milk and Honey. Some are obvious jokes, and others … well, if you haven’t read the book, you’d be forgiven for thinking they were real poems.

The trend seems to have started with this tweet by RicardoJKay, which throws shade at Rupi Kaur by implying that adding line breaks to any chunk of text makes it just as poetic as Milk and Honey. Even if it’s “Step the fuck up, Kyle” Vine or the classic “Post up.”

Other Kaur detractors picked it up and ran with it, making Vine quotes look like actual pages from the book. Notable entries include the “Miss Keisha” Vine

and the infamous jellybean story:

this was my favorite poem from milk and honey, so deep and meaningful pic.twitter.com/SMcIoFH0E3

And Jared, who never learned how to read:

Twitter’s Bobby (@bobby) was so incensed at Kaur’s poems that he went off on a long, mocking rant, culminating in one brilliant Photoshop:

sorry but this shit sucks so bad lol pic.twitter.com/axjlIv1hkn

i
am my own
dad

What makes Milk and Honey such a target of mockery? Partially, it’s how successful it’s been. Few poetry books ever become social media sensations, let alone receive the kind of exposure and mainstream marketing push Kaur’s book did. It’s sold more than a million copies. And then there’s its main audience: young women on Instagram and Tumblr. The internet gives especially harsh treatment to popular things young women love, often dismissing them as vapid just because girls like them. There’s a little bit of that going on with the Milk and Honey Vine quote meme.

But there’s also mockery of poetry in general, and its perceived pretensions. Kaur’s poetry, which was described in the New  York Times as having “artless vulnerability,” is just an easy target.

“People aren’t used to poetry that’s so easy and simple,” Kaur herself has said.

Understandably, the meme is a bit divisive. Some people hate it

while others think it’s the best thing that’s happened to the internet in quite some time.

people are pressed over the milk and honey meme when lots of art/music/poetry/ect has been made into jokes before. wyd

Hey, at least teens are talking about poetry again!