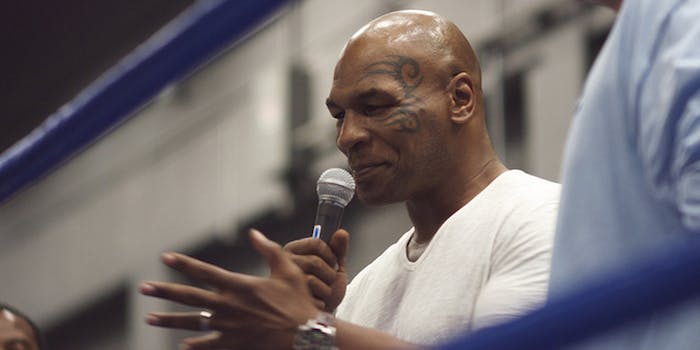 Don't get on Mike Tyson's bad side.

Ask most boxing experts for their prediction for Saturday’s Floyd Mayweather-Manny Pacquiao fight, and the thinking ahead of the mega-bout is awfully clear. Big-time boxers say, for the most part, that Mayweather will win. Most boxing writers think the same way. And for what it’s worth, I think Mayweather will prevail on points.

But if you ask Mike Tyson, the most-feared heavyweight champion of the past 30 years, you’ll get a different answer. Just ask him (if you dare) about what he thinks about Mayweather’s claim that he’s greater than Muhammad Ali.

Said Mayweather recently in a critique of Ali’s career: “He only ever fought in one weight class. Leon Spinks beat him when he had seven fights. They’d never put a fighter in there with Floyd Mayweather with seven fights.” Mayweather also criticized Ali’s successful Rope-A-Dope method against George Foreman that gave Ali one of his biggest wins (and one of the most well-known boxing victories in history).

Altogether, it was a disrespectful moment for Mayweather talking about one of the boxing greats.

Mayweather also drew a response from Ali and his daughter, Laila—who called Mayweather a “broken person” and a “little boy.”

Meanwhile, Ali (or someone in his camp) took to Twitter.

"Don't you forget, I am the greatest!" #MuhammadAli pic.twitter.com/HXaTz39RPM

Pacquiao also might have something to say on Saturday about Mayweather’s claim, and for now, Pacquiao is the only one with the ability to shut up Mayweather for good.