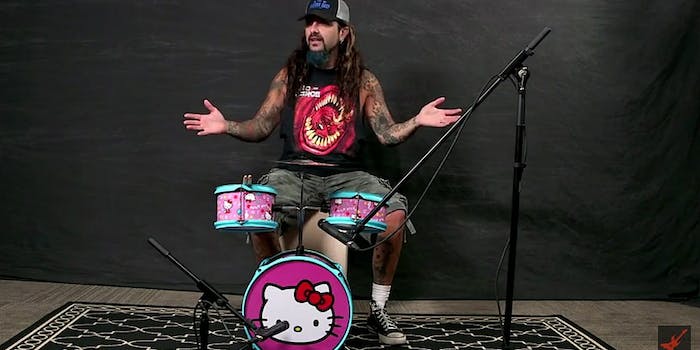 His covers of Rush were particularly good.

Mike Portnoy is a legendary heavy metal drummer, co-creating Dream Theater (one of the most popular prog metal bands ever) and then combining with bassist Billy Sheehan and guitarist Richie Kotzen to form supergroup the Winery Dogs.

As one of the most masterful percussionists working today, Portnoy recently answered the question on most everybody’s mind. Could he play covers of metal songs on a Hello Kitty drum kit?

Though repeatedly destroying the Hello Kitty drum kit—which can be procured from various online sellers for $60 to $80—Portnoy performed impressive covers of Led Zeppelin, Rush, Slayer, and Metallica with only a single bass drum, a tom drum, a snare drum, and one cymbal.

So imagine what he could do with an actual, adult-sized drum kit …