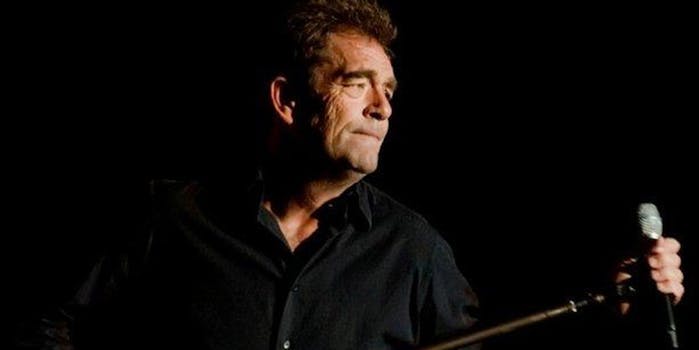 The real Mike Huckabee tweets to the parody Huey Lewis

This is the comedy coup that every parody account dreams of

Mike Huckabee is about values and freedom—and the freedom he values most is the freedom to rock.

OK, that might not be strictly true, but the former Arkansas governor turned presidential hopeful turned pundit does break out his trademark electric bass every chance he gets. When his presidential prospects had all eyes on him in 2012, he took advantage of the spotlight with a Lebron-esque special episode of his Fox News show, throwing down for a duet with firebrand rocker Ted Nugent.

So maybe it was only a matter of time before Huckabee’s classic rock fandom got the better of him as it did today when his official Twitter account tweeted out Huckabee’s radio interview with Huey Lewis, commemorating the 30th anniversary of his seminal record, Sports.

The only problem? @ImHueyLewis, isn’t.

Tweeting from my new iphone. I guess it really IS hip to be square.

@ImHueyLewis is a parody account created by Chicago comedian Joe Kwaczala in 2011. The joke is pretty straightforward—each update has Mr. Lewis befuddled by some piece of modern technology or a news item, forcing him to process it the only way he knows how—through one of his signature hooks:

I can charge my phone with my laptop? I guess it really IS hip to be square.

Hey now, I’m just hearin’ the scoop now! Tom Cruise and Katie Holmes are calling it quits? Sounds like they didn’t have… the power of love

So this After Earth flick is about our planet in a scary, spooky future? I bet the Fresh Prince will be wishin’ he could go… back in time.

The repetition is intentional, and unmistakable—if you bother to look.

“I think what helps is that I registered the account a considerable amount of time before the real Huey Lewis,” says Kwaczala, a mainstay of Chicago’s stand-up comedy scene, departing soon for L.A. “So if you’re REALLY not paying attention, @ImHueyLewis might seem like the one for ‘the guy’ vs. [the official @Huey_Lewis_News] ‘the band.’ Looking at Huckabee’s tweet, that seems to be what he thought.”

Still, despite pulling the comedy coup that every parody account dreams of, Kwaczala is humble about the simplicity of the Twitter side project. “I’m not even very good at it, both in quantity and quality terms—It’s not like it’s supposed to be high comedy.” But that doesn’t stop him from taking a little pride in this particular instance of mistaken identity.

“Huckabee is by far the most prominent person to be ‘fooled,’ and it fills me with endless joy,” Kwaczala says. “He has a naivety and cluelessness about his persona that makes him the perfect candidate to be the recipient of this light, unintentional prank. Plus, his blandness as a person lines up just right with the overall quality of Huey’s music. He also has very questionable opinions on things like gay rights, so this is a nice example where you can go ‘Yeah, but you thought this dumb thing was real, so what do you know?’”