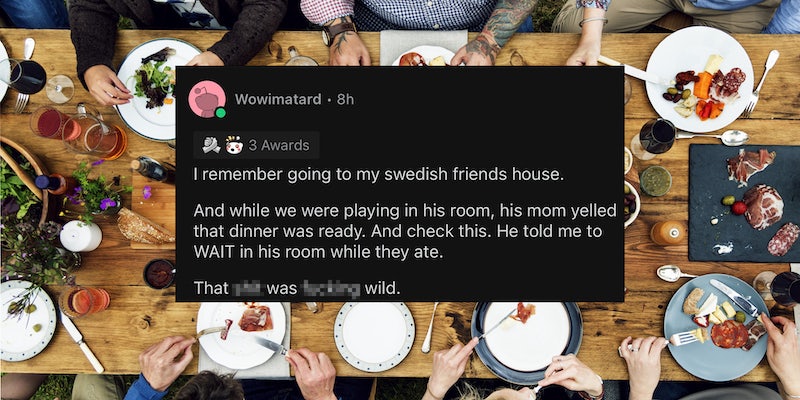 Discourse broke out over a screenshot from a recent Reddit thread.

We already know that different parts of the world have different cultural norms for just about everything you can think of. But that still didn’t stop the country of Sweden becoming the center of an online discussion over the weekend on the particulars of house guests during mealtimes.

Last week, Twitter user @SamQari posted a screenshot of a recent r/AskReddit thread that posed the question, “What is the weirdest thing you had to do at someone else’s house because of their culture/religion?” With more than 16,000 comments, people’s responses vastly varied, but the screenshot in particular detailed two redditors’ experiences after visiting the homes of Swedish friends. One person was told by their friend’s mother to wait in the friend’s room while the family ate while the other was, 25 years after it happened, still haunted by the fact that their friend’s family ate breakfast (without offering any to them) post-sleepover.

“Not here to judge but I don’t understand this,” @SamQari wrote. “How’re you going to eat without inviting your friend?”

Your reaction to the discovery that, in at least some parts of Sweden, house guests aren’t automatically served food if their visit coincides with a meal, probably depends on where you lived or grew up.

Some took to highlighting just how unthinkable it would be not to offer people food because of the cultures they were raised in. Whether it’s highlighting a specific Asian culture, southern European countries like Italy or Greece, or even the American South, it’s considered rude to offer a guest absolutely nothing; oftentimes, food might still be offered even if the initial offer is declined.

They even started to post about how to prepare to visit a Swedish person’s home.

Meanwhile, Swedish and other Scandinavian folks spoke about how common it was—and often how bizarre the practice can be, especially to someone who may not be aware of that fact or is from a culture that does share food with others.

In the wake of the discourse around Sweden’s tendency not to feed house guests, the hashtag #SwedenGate was launched to highlight Sweden’s long history of racism.

One person posted a graphic illustrating the likelihood of being offered food as a house guest depending on which European country you were in, pointing out a correlation between Norse and North Germanic countries and their tendency not to usually offer food. In Scandinavian countries, it was very unlikely, but for the most part—Scotland and Ireland being the exceptions—the further south or east you moved on a European map, the more likely you would be offered a meal.

And naturally, that graphic was soon memed.

Nothing about Swedish people’s general inclination to not feed house guests will likely change overnight. But after a days-long discourse about feeding house guests erupting online, it, if nothing else, gives the rest of the world a greater perspective on Sweden—and perhaps fuel for when the next minor cultural spat breaks out online.