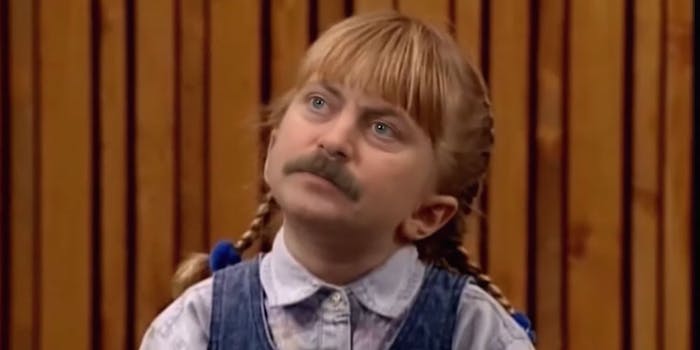 Hit ’90s sitcom Full House and everyone’s favorite satire show, Parks and Recreation, have combined forces in a deepfake video that is sure to creep you out.

Developed by deepfake creator Dr. Fakenstein, the video centers around the 1992 Full House episode “The Devil Made Me Do It,” in which Michelle Tanner rebels against the family.

The young Tanner disobeys Uncle Jesse by messing around in his music studio—much to the annoyance of her father Danny Tanner. But when Michelle gets scolded by her dad and Jesse, things get a little weird.

The reaction online to seeing the young tanner sporting Swanson’s face and signature mustache was as expected.

“Michelle is so distracting you don’t really realize Jesse and Danny have also been changed,” one YouTube commenter wrote.

Just days prior, Dr. Fakenstein decided to give every feline in the frightening Cats trailer Offerman’s face after the actor retweeted a photoshopped picture of himself in the movie.

We can only imagine what terrifying creation Dr. Fakenstein will come up with next.