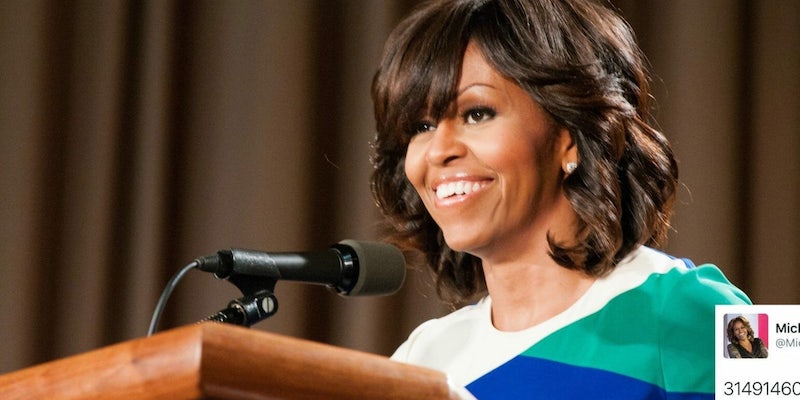 Photo via U.S. Department of Agriculture/Flickr Remix by Josh Katzowitz

Michelle Obama’s Twitter account is currently filled with photos of her hugging high school students who have made decisions about college and the evidence of her participating in a pushup contest against Ellen DeGeneres.

But on Friday afternoon, a mysterious 10-digit number appeared on her account, not unlike Sean Spicer’s accidently disclosed password from a few months ago.

What was this? The password to her Twitter account? The number of people who will be affected by the American Healthcare Act bill? The amount of money Barack Obama might charge the next time he gives a speech?

Naturally, the internet was curious.

Wait a minute. Ten digits, right? Is this a phone number?

Michelle Obama tweeted, then deleted, what appears to be a phone number. pic.twitter.com/Mng2LepSCY

But whose digits could they be? Sasha? Malia? The former president? Who, dammit, who?

Michelle just tweeted this number. I rang it. Got the voicemail for Duncan Wolfe, who's taken photos for the Obamas https://t.co/aozmzUAtg8 pic.twitter.com/KNE85tMxWj

If it’s any consolation, Wolfe already lists that phone number publicly on his website. But it has since been removed.

As Mack points out, Wolf was also a creative digital strategist for the Obama White House. According to Wolf’s biography in this press release, he helped launch Snapchat accounts for Michelle Obama and “he leant his signature creative vision to scores of digital content, searching out new and innovative ways to document the 44th American Presidency across the next generation of media, including Twitter and Facebook.”

That’s a good resume for Wolf. And for anybody who wants to get in touch about a possible job for him, now, thanks to the former first lady, you can call him directly.