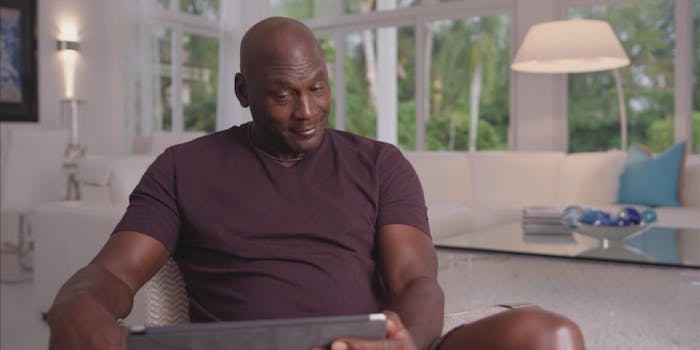 Whether you know him for his legendary skills on the court or his iconic meme-able expressions, you definitely know Michael Jordan. The NBA Hall of Famer added a burgeoning new meme to his resume with last night’s episode of ESPN docuseries The Last Dance, which focuses on Jordan and the 1997-98 Chicago Bulls.

In the latest installment of The Last Dance, Jordan reflects on the Bulls/Detroit Pistons face-off in the 1991 Eastern Conference finals, where the Pistons’ Isiah Thomas and Bill Laimbeer walked off the court with 7.9 seconds on the clock and did not congratulate their opponents. Director Jason Hehir hands Jordan an iPad to watch footage of Thomas explaining his decision—and Jordan is not having it.

“I know it’s all bullshit,” Jordan says. “Whatever he says now, you know wasn’t his true actions then. He has time left to think about it, or the reaction of the public that’s kind of changed his perspective. You can show me anything you want; there’s no way you can convince me he wasn’t an asshole.”

Jordan’s bemused expression while watching the video spread like wildfire on Twitter, with many heralding it as the successor to “Crying Jordan.” Former NBA player Dwyane Wade—who played for the Bulls from 2016-2017—recognized a fire meme when he saw it, anticipating another viral reaction face. (Wade’s followers also got a kick out of his capitalization of “meme.”)

Twitter users applied the new Jordan meme to a variety of situations, from checking your UberEats bill to stumbling upon your girl’s OnlyFans account. Others also used it to describe their feelings about Carmen Electra, who dated Jordan’s then-teammate Dennis Rodman.

The new, yet-untitled Jordan reaction face has already exploded on Twitter, and it’s only Monday morning. Expect to see it everywhere over the next few days. In the meantime, enjoy some of the finest early examples of the burgeoning Jordan meme.