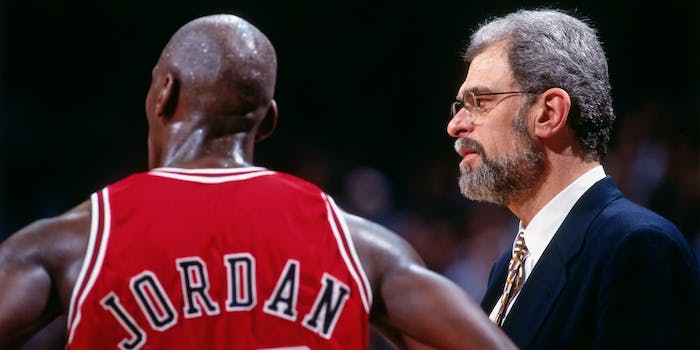 ESPN gets the band back together for a compelling start to its 10-part documentary.

ESPN, under its 30 for 30 banner, debuted the first two hours of its hotly anticipated The Last Dance Sunday night. For anyone who remembers the Michael Jordan-led Chicago Bulls teams of the ‘90s, The Last Dance scratches a nostalgic itch while taking viewers behind the scenes with incredible access. The team allowed a film crew to capture the 1997-98 season, which served as a victory lap and swan song for one of the NBA’s great dynasties.

Director Jason Hehir splits the narrative into two primary timelines. There’s the story of the ‘97-98 season and everything that went into it, then there’s the real story, which is Michael Jordan. The opening hours of the documentary walk viewers through Jordan’s collegiate career and early years with the Bulls. Anyone who knows anything about Jordan’s career will likely find this portion redundant. The audience for The Last Dance knows about Jordan’s time at the University of North Carolina and how the Portland Trailblazers set their franchise back 20 years by drafting Sam Bowie over Jordan (a feat they would replicate 20-odd years later by picking Greg Oden over Kevin Durant, but that’s neither here nor there). But the production is slick and most viewers won’t mind reliving Jordan’s origin story.

That familiarity with the subjects works for and against The Last Dance. The first two hours are really fun. Between the archival footage and the present-day interviews with every major NBA personality, that sense of listening to people recall the glory of yesteryear is a pleasure. Over 20 years have passed since that final Bulls title run, but some of the emotions are still raw. The sharpest moments in these early hours come from the most honest moments, like Scottie Pippen’s bitterness toward Bulls brass, particularly General Manager Jerry Krause.

The Last Dance is the most ambitious 30 for 30 project since the Academy Award-winning O.J.: Made in America in terms of length, if not depth. The stories of Jordan and the ‘97-98 Bulls are well covered. Even if The Last Dance mostly reaffirms what we know, it adds a layer of context that makes the story worth revisiting.

But I hope the remaining eight hours dig deeper than what we saw here. Jordan remains an enigma because of his stoic public persona and behind-the-scenes legend, and this doc pledged to explore that side of him—not just recount his greatest hits. Even if it doesn’t, as long as it maintains tonight’s level of quality, The Last Dance will be worth the time investment.

ESPN will debut two parts each Sunday through May 17 and they will be available on the ESPN app immediately after airing.

READ MORE: How to stream ‘The Last Dance’