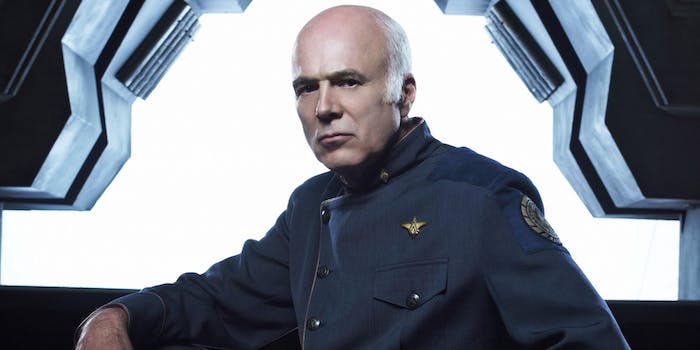 Best known for playing Saul Tigh on Battlestar Galactica, Michael Hogan is a prolific actor whose career spans numerous TV shows including Teen Wolf, Fargo, and 12 Monkeys. But due to a serious head injury earlier this year, he is unlikely to work again.

This sad news was revealed by a GoFundMe page created on behalf of his wife, actress Susan Hogan. The couple’s friend and neighbor Shari Ulrich set up the crowdfunding page to reach out to fans during a time of need, explaining the difficulties of the past few months. In a letter shared on GoFundMe, Susan Hogan writes:

“On Feb. 17, 2020, everything changed drastically in our world.  Michael was in Vancouver participating in a Battlestar Galactica convention, and at dinner following his day’s work, he fell and hit his head. Hard. He went to bed that night not realizing that the impact had caused a massive brain bleed.  He was unable to be woken the next morning and was taken to Vancouver General Hospital and emergency surgery performed. It took 57 staples to close the part of his scull they had to remove in order to reach the damage.”

Since then he has suffered from partial paralysis, memory loss, cognitive impairment, and an inability to swallow—a series of serious problems that were made even more difficult by the pandemic, which meant Susan had to care for her husband alone, without visits from family or carers.

For the past three months, Michael has been living in a care home in Vancouver, with visits restricted to masked, socially distanced contact. It sounds like a heartbreaking challenge for both him and his wife, and the goal of the GoFundMe campaign is to give the couple a financial safety net and hopefully pay for Hogan to come home with a live-in carer.

It’s a stark reminder that while someone may be a public figure, that doesn’t mean they’re financially prepared for this kind of medical event. Thankfully it looks like Hogan’s fans are spreading the message far and wide, with the GoFundMe page raising $134,000.