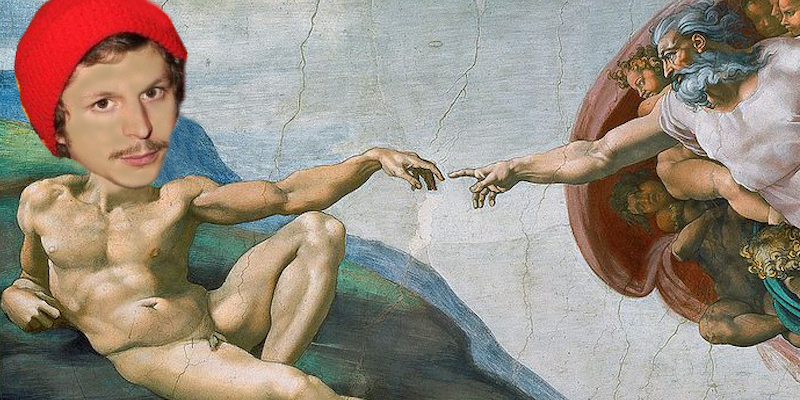 That must be the mantra of a recently featured Imgurian whose username says it all. ANewBadlyPhotoshoppedPhotoofMichaelCeraEveryDay has sharply honed his Photoshop skills for the last two months, and his muse is none other than awkward indie actor Michael Cera.

According to Imgur, the artist behind this never-ending supply of “badly photoshopped” Michael Ceras began his project because he was envious of other users’ Photoshop skills.

“I had zero Photoshop skills, and I was completely jealous,” he told Imgur. “I knew I couldn’t Photoshop and thought I never would be able to, but an idea came to me.”

Much to the delight of many (and the dismay of some) his absurd project emerged with a Michael Cera photoshopped onto the face of The Mona Lisa.

“My first Mona Lisa post was literally the first time I had ever used Gimp. I didn’t even know how to save the file as a .jpeg! I screen captured it in Gimp, pasted it in MS Paint, and cropped it,” the artist said. “I did that with a lot of my early posts until I learned to export. The response was very mixed, but I was determined to post every day, as more than anything, I genuinely wanted to improve, and my end goal was to learn how to create a GIF.”

And create a GIF he did.

While posts like this can inspire both love and loathing, ANewBadlyPhotoshoppedPhotoofMichaelCeraEveryday said he’s enjoyed interacting with the Imgur community.

“More than anything I love the comments and interaction with Imgur. There are some quality people out there!” he said. “I always try and respond as often as I can. I know you can never please everybody, but the positive feedback and comments from people who say the posts make them smile or have brought them some form of happiness means a lot to me.”

MFW I can’t decide which version of a .gif I should post…..

The Imgur user says he has big plans for his future on Imgur. And given how he’s inspired the community so far, we can only imagine what further magic this Photoshop maestro still has up his sleeve.

MRW people ask how much time I spend on these badly photoshopped Michael Cera posts….