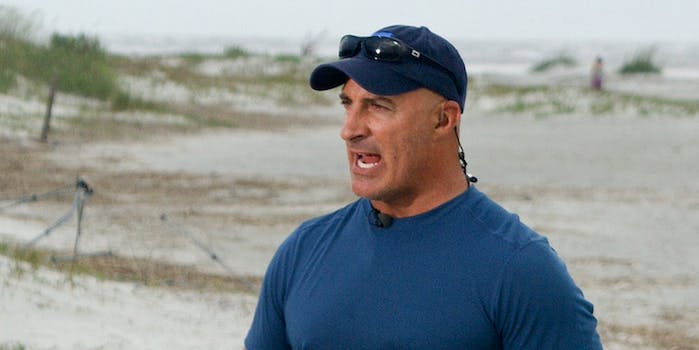 The forecast calls for heavy regret.

Weather reporters, when they’re not indoors gesturing at a green-screen map, face some harrowing conditions: gale-force winds, freezing cold, and harassment by idiots who want to be on TV.

If this Vine is any indication, Weather Channel meteorologist Jim Cantore has dealt with more than his fair share of that last annoyance—and knows exactly how to defuse it.

Cantore was reporting on Winter Storm Leon in Charleston, S.C., when a battle cry suddenly filled the air. Taking a moment to glance away from the camera, he spotted its source, a young man charging directly at him. Unwilling to be tackled (or bear-hugged?), Cantore calmly lifts one knee to testicle height and lets his assailant take care of the rest.

Sure, the guy looks uninjured as he beats a retreat, but I bet you anything that the shock of running groin-first into a TV personality at top speed just delayed the pain somewhat. Unlike the throbbing in his genitals, however, the embarrassment will never fade.