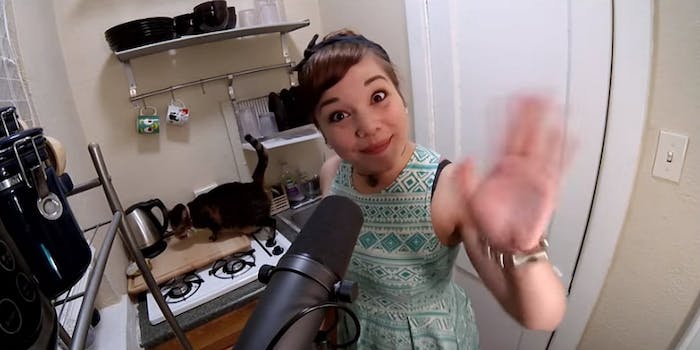 One of the most ironic-sounding songs in the Tool catalog is “Die Eier Von Satan,” an industrial-metal-type tune that sounds like an angry German-speaking man barking out commands at an enthusiastic crowd but, when translated, is actually a recipe for eggless cookies.

But the song below tops even that oddity. Because there’s nothing in the world better than a metal song in which the singer growls about how to make shepherd’s pie (and it all rhymes).

Linzey Rae, the woman singing/growling the song, is the frontwoman of a Denver-based metalcore band called The Anchor. While her recipe sounds delicious, I’d be wary of the cat roaming around the kitchen counters just before the cooking begins.

For those who are skeptical that it’s actually Rae growling her way through the song, this should be proof enough that it was her voice all along.

We are The Anchor and we scream like a girl.

While the band is reportedly surprised by the viral nature of its video, The Anchor is probably enjoying the notoriety, particularly because all proceeds from the song, “The Ghost Inside Makes Shepherd’s Pie,” go to the band The Ghost Inside, which was involved in a serious bus accident in November that killed the driver and a passenger in another vehicle.