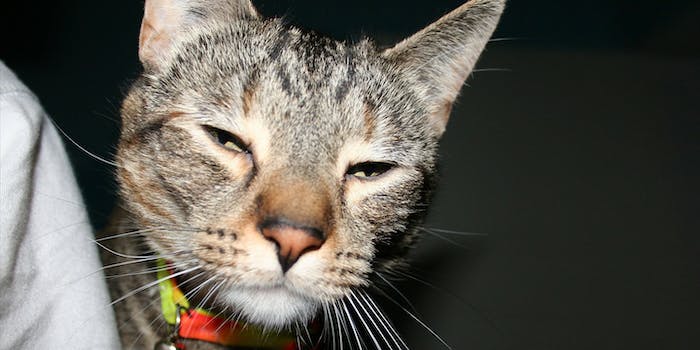 We experimented with Meowijuana, the ‘marijuana for cats’

My cat lost her damn mind.

Look, I’m a realist. I know that it’s impossible to share a toke with my beautiful cats. But as a stoner, it’s something I’ve always dreamt of doing. They’re pretty chilled out by nature, so mostly I just pretend they’ve joined me on an altered plane of consciousness.

But what if I needn’t pretend any longer? What if there were a product—say, catnip—not blandly packaged and sold in pet stores, but branded to appeal to stoners like me and available for purchase online, that could afford me the opportunity to chemically commune with my pets?

Look no further, fellow feline-friendly pot fiends, for a product has shimmied its way into our cold, meaningless lives, sold exclusively in a little place called Meowijuanaville:

Perusing Meowijuana’s online retail presence, you have a few choices of catnip “bud,” as well as your pick of many accessories that allow you to flaunt your quirky weed/catnip consumerism. All the “bud” is packaged with labels featuring big green crosses, meant to convey its hilarious faux benefits as a “pharmaceutical drug.” To assuage any doubts of the legality of such a purchase, the fine folks at Meowijuana LLC also offer you the option of purchasing a “Medical Meowijuana ID” for $9.95, which you can file away in case the feds get wind of your cat drugs. 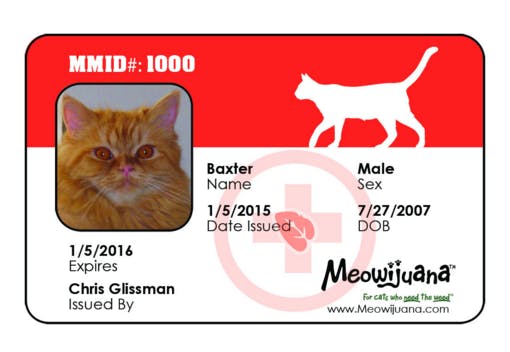 Because I was on a budget, I took the risk of only purchasing the small jar of Purrple Passion strain catnip (sans ID card), feeling very assured by its nine 5-star reviews that the herb would transport my cats into a reality beyond their comprehension.

When the package arrived, my cats—Petey, my gray tabby and Cheddar, my orange tabby—were immediately intrigued. 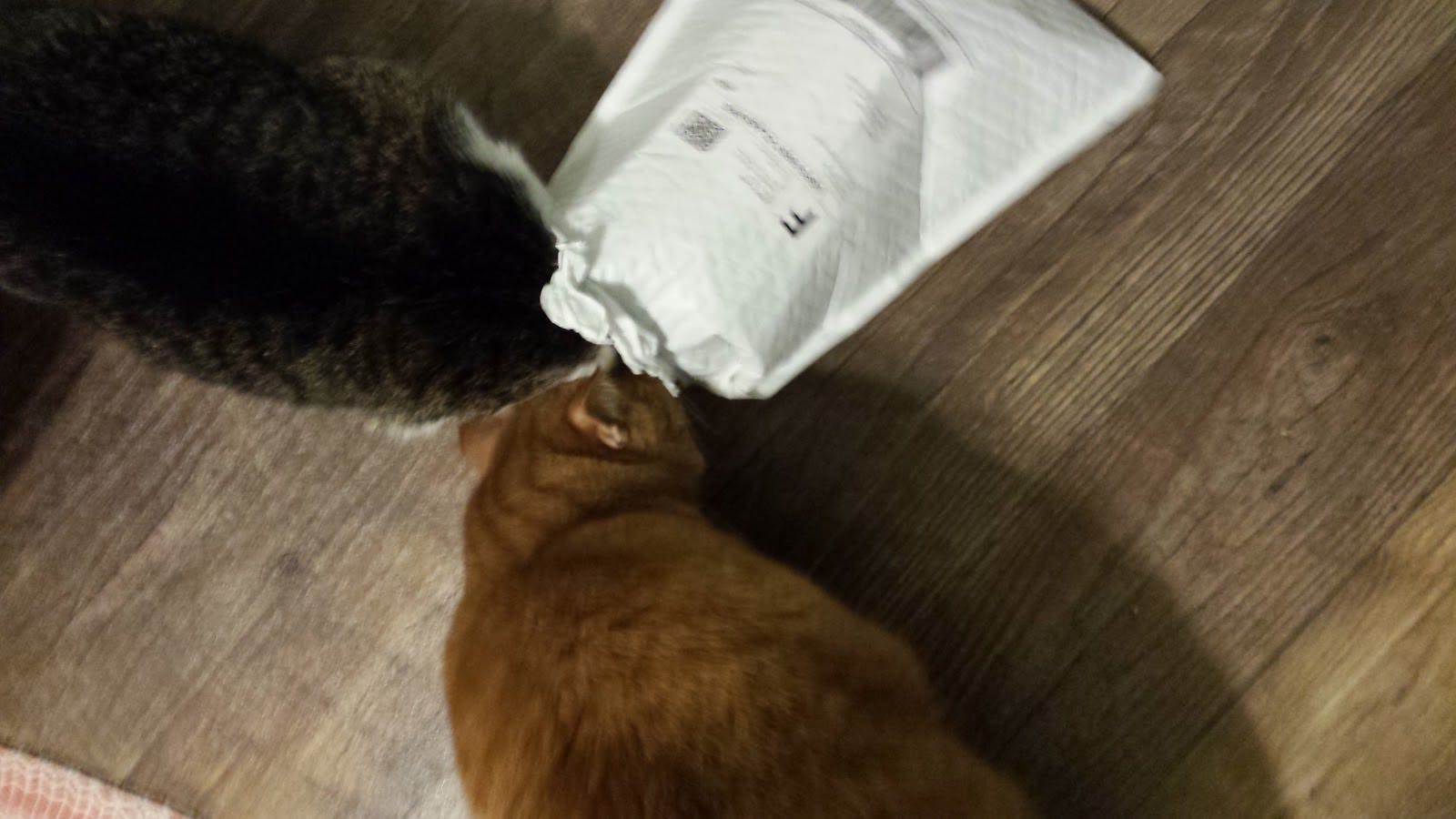 A little background on my precious beasts: In general, I describe Petey as the pretty and sweet cat who conveys little to no substance of character, evidenced by her hollow, empty eyes. She’s not very bright, but she’s cute. She also doesn’t understand boundaries or that her claws are sharp.

Cheddar, on the other hand, is much more human-like. He processes way more information about you than Petey does or ever will. He understands boundaries and that his claws are sharp. For these reasons, he’s my favorite (don’t tell Petey). I like to think that it’s his suffering through hardship—specifically, asthma—that has informed his sense of being.

So I guess what followed post catnip-consumption wasn’t exactly surprising, and I was proud that Petey finally found her soul’s calling. 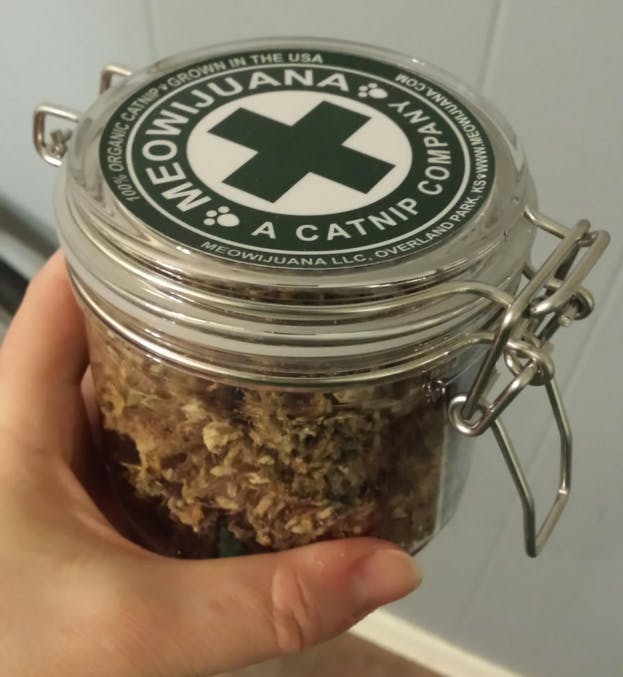 In short, Petey lost her goddamn mind. She couldn’t get enough of this stuff. She rolled and pawed around, licking a bag filled with a couple of catnip buds (it didn’t take much!), chewing on it so aggressively that she released the buds in order to get them directly into her mouth. She was consumed by a desire that held her and forced her body to and fro—she needed that ’nip any way she could get it. 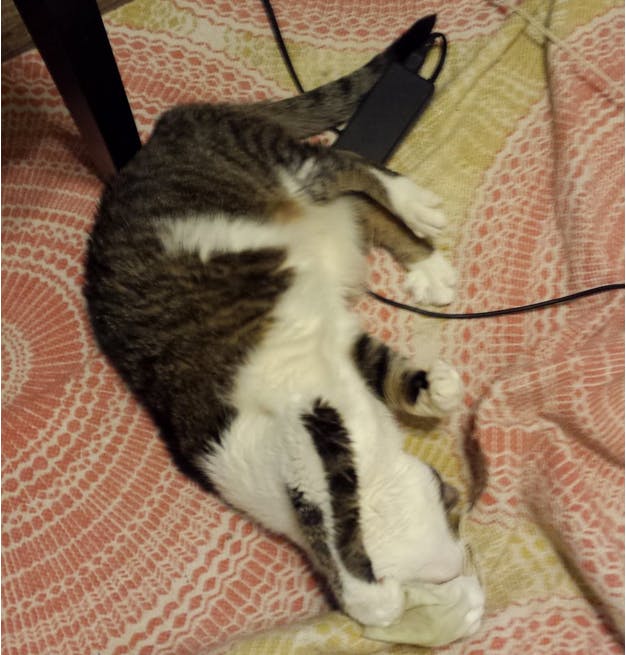 Cheddar had his fun, too. But this is the only compromising position I caught him in during this extended catnip photo session: 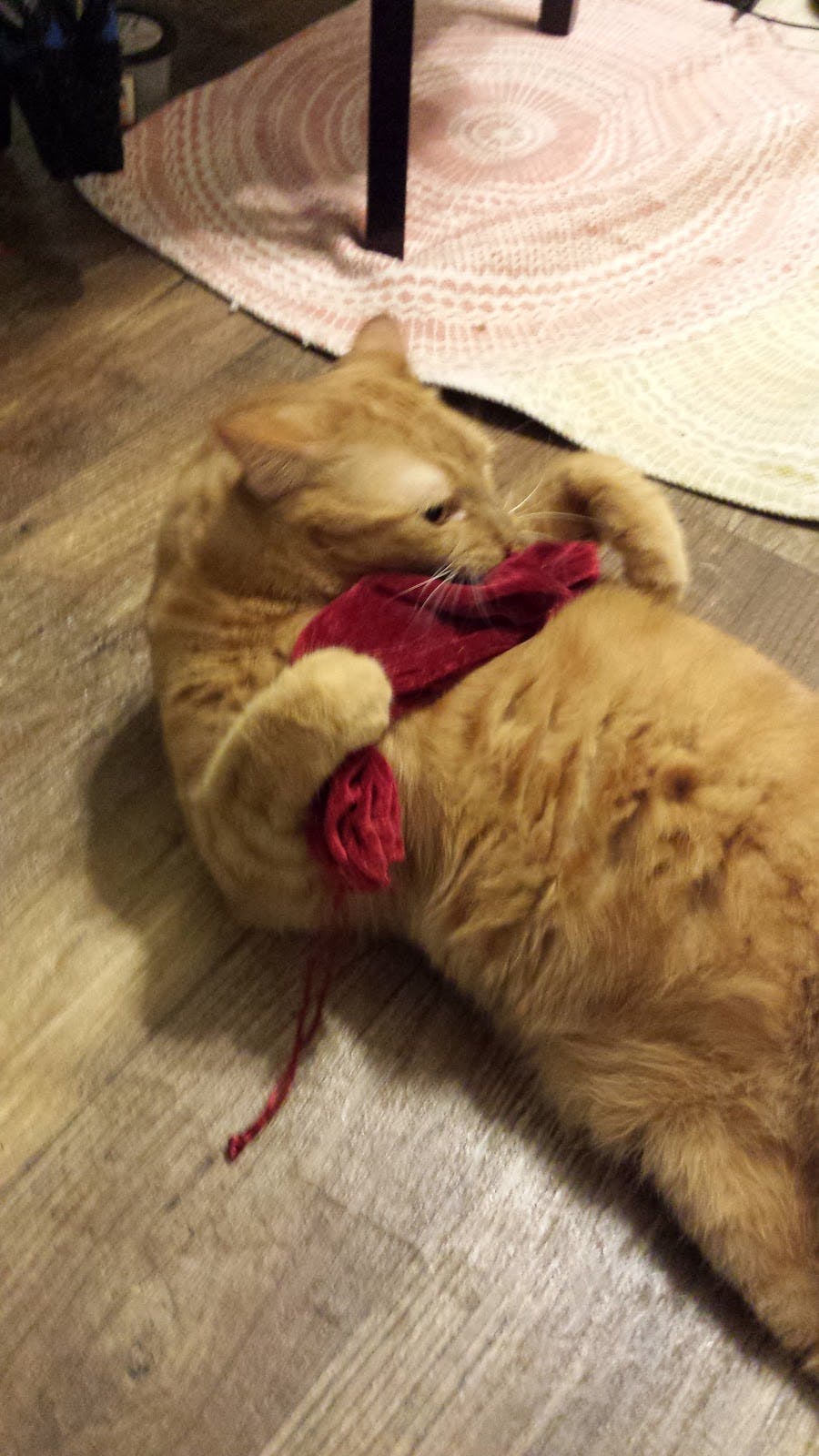 About 10 minutes later, he was over it—as if possessing the knowledge of a prophet who knows the depths of life’s bounty and that catnip is only one of many avenues of access—and saw fit just to stand idly by while Petey reveled in ecstasy for the next 45 minutes. 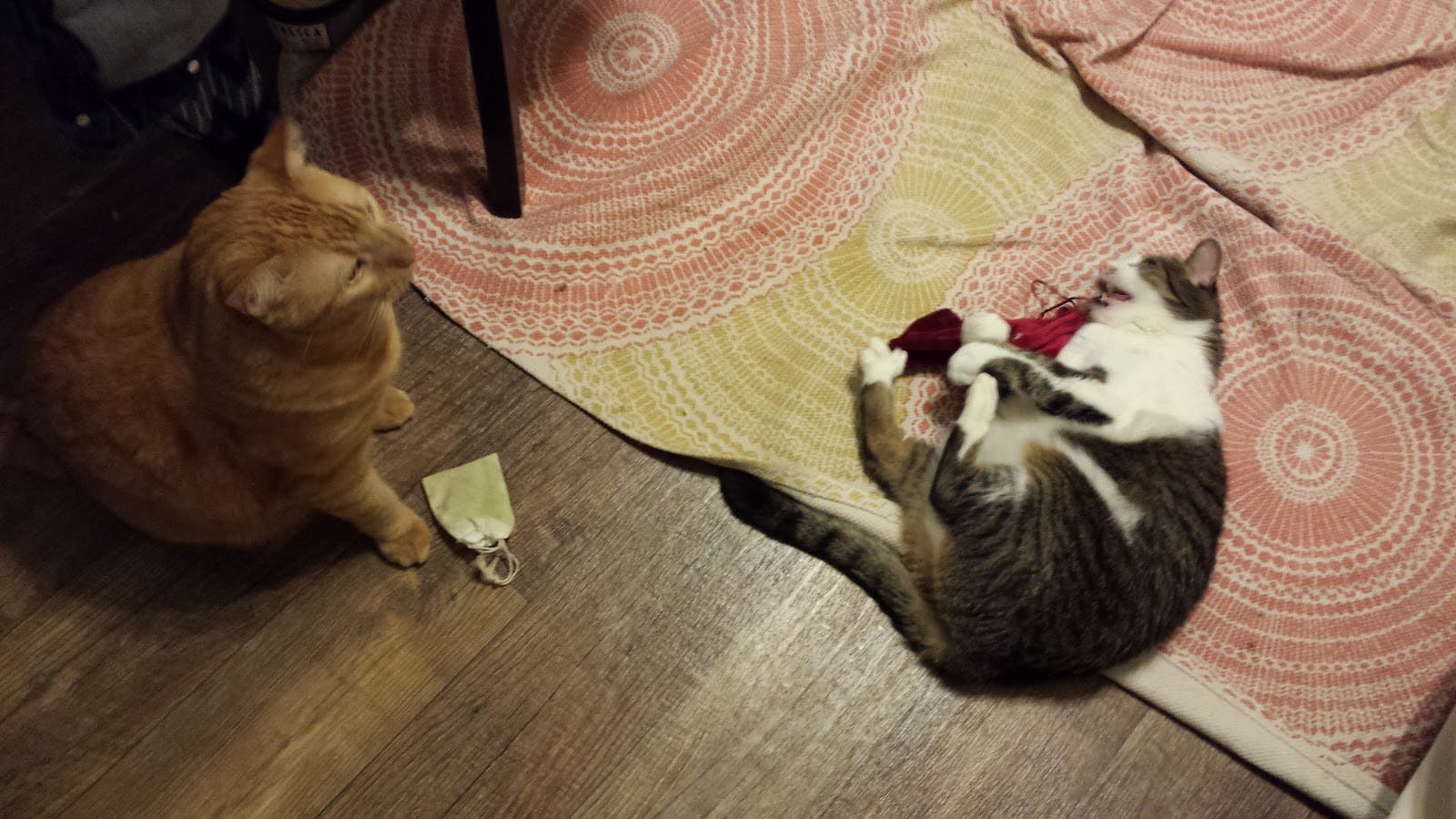 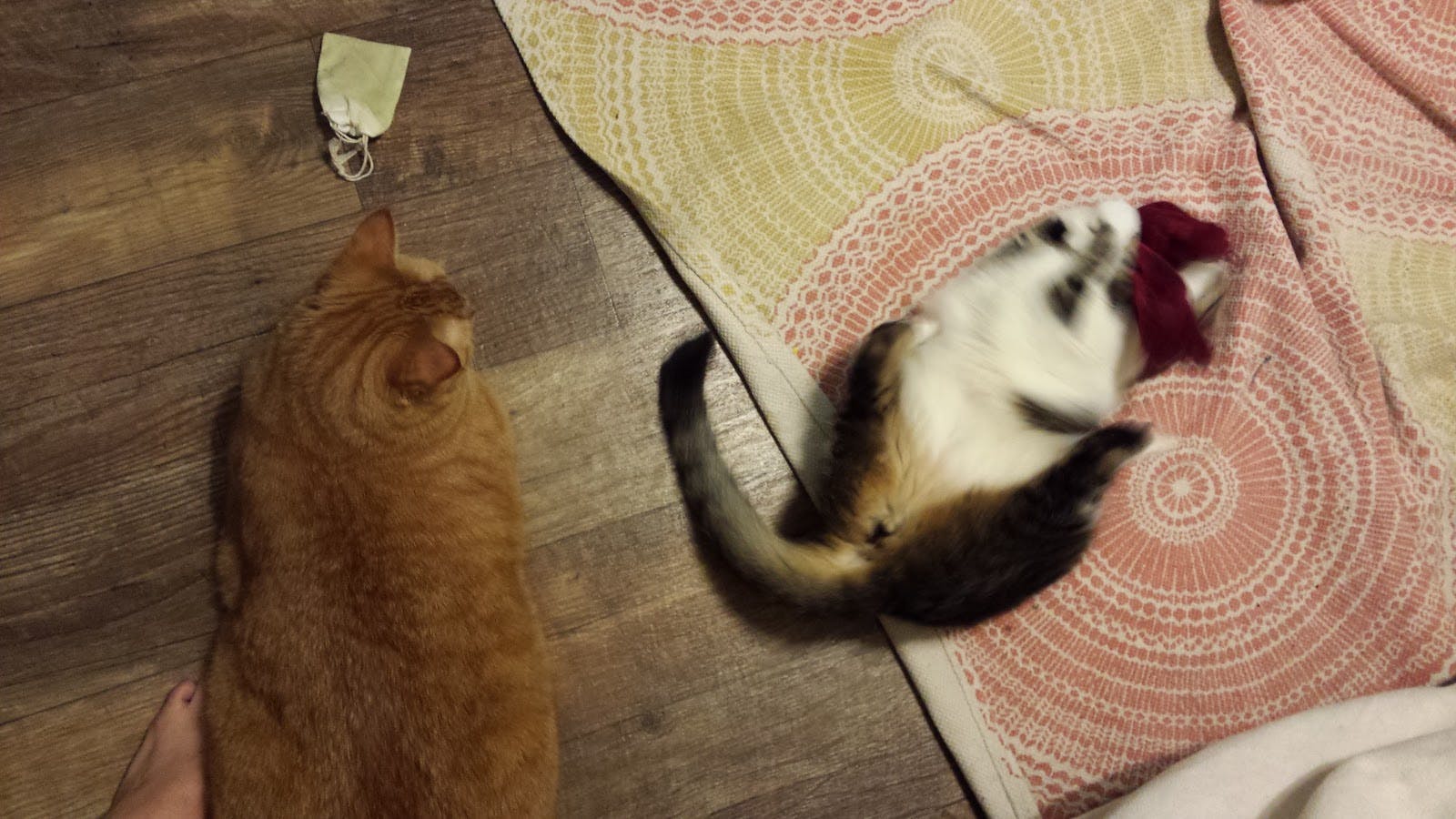 I repeated this experiment a couple of times, giving Petey (the true connoisseur) the chance to choose between pet-store brand catnip and the branded-for-her-stoner-owner Meowijuana, and she always picked the latter, always losing all her shit. 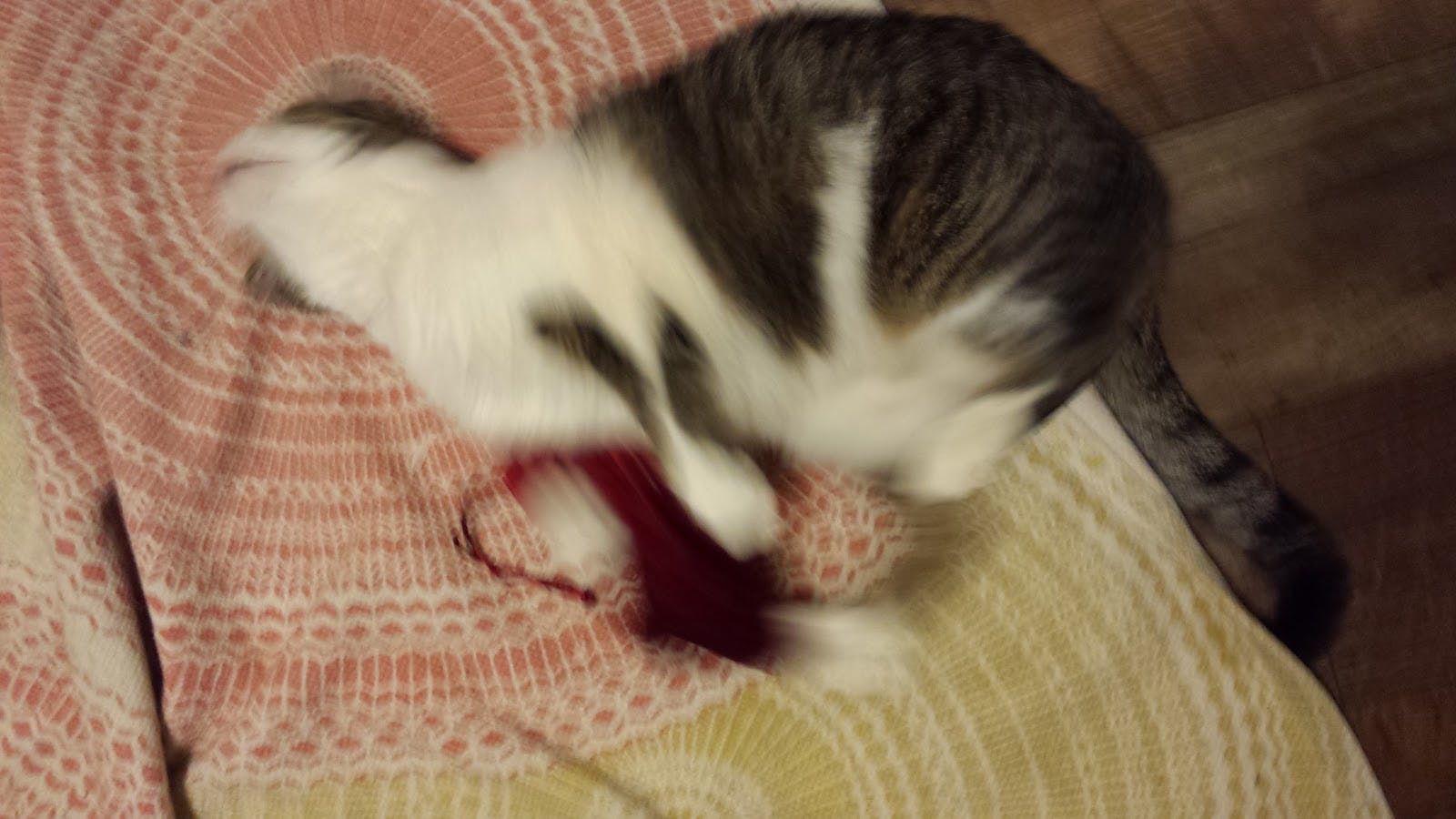 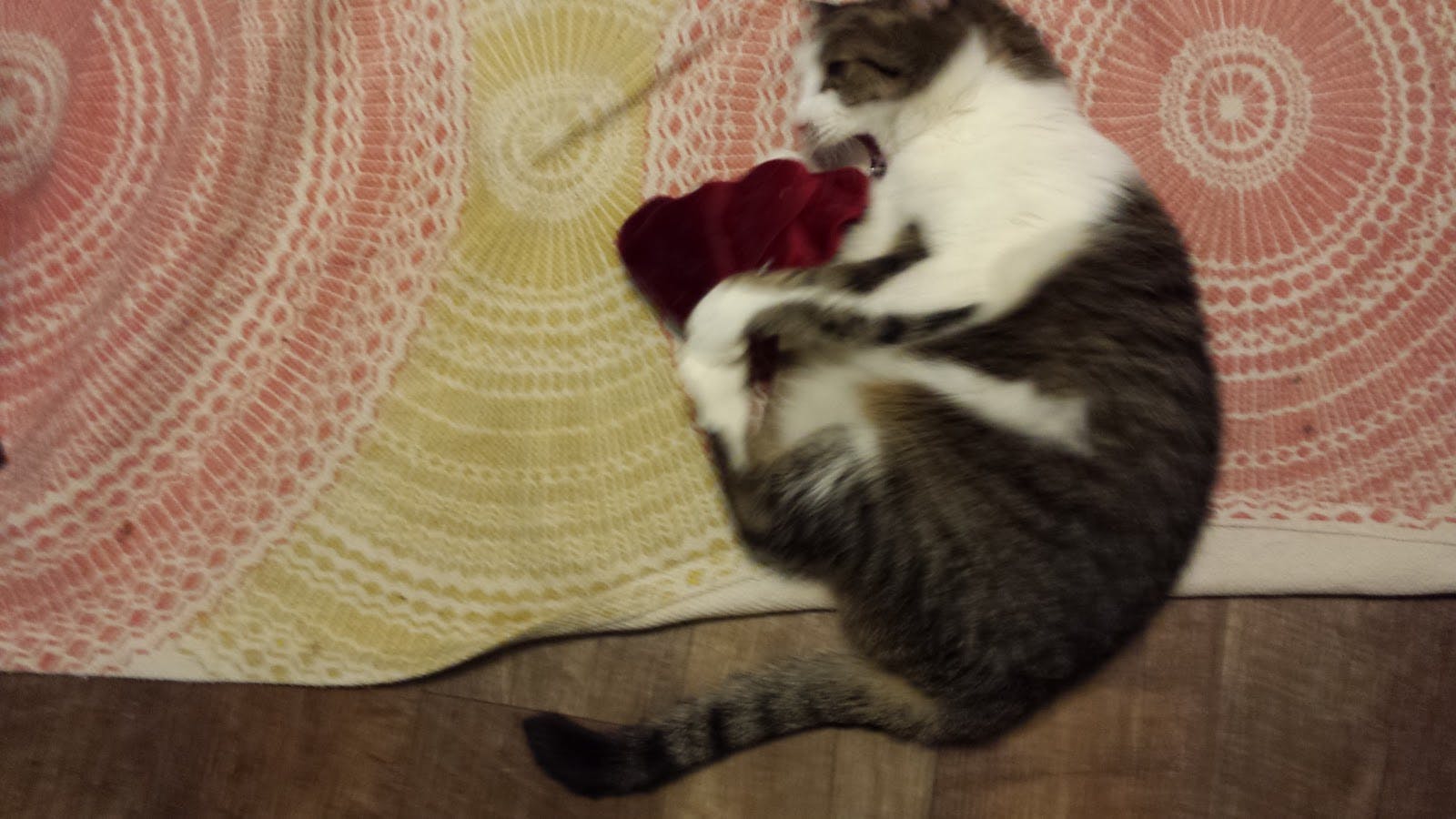 Maybe certain strains of marijuana have a similar effect on people, but I’ve never seen it. Catnip isn’t weed for cats; it’s MDMA for cats. Or at least this cat who I’ve already mentioned is basically an empty vessel waiting to be filled with anything of substance. Perhaps it is only through this herb that Petey can fully express herself—can finally fill herself up with something more than vacuity. With Meowijuana, she has found her soul’s complement, she explored the deepest wells of her True Self. 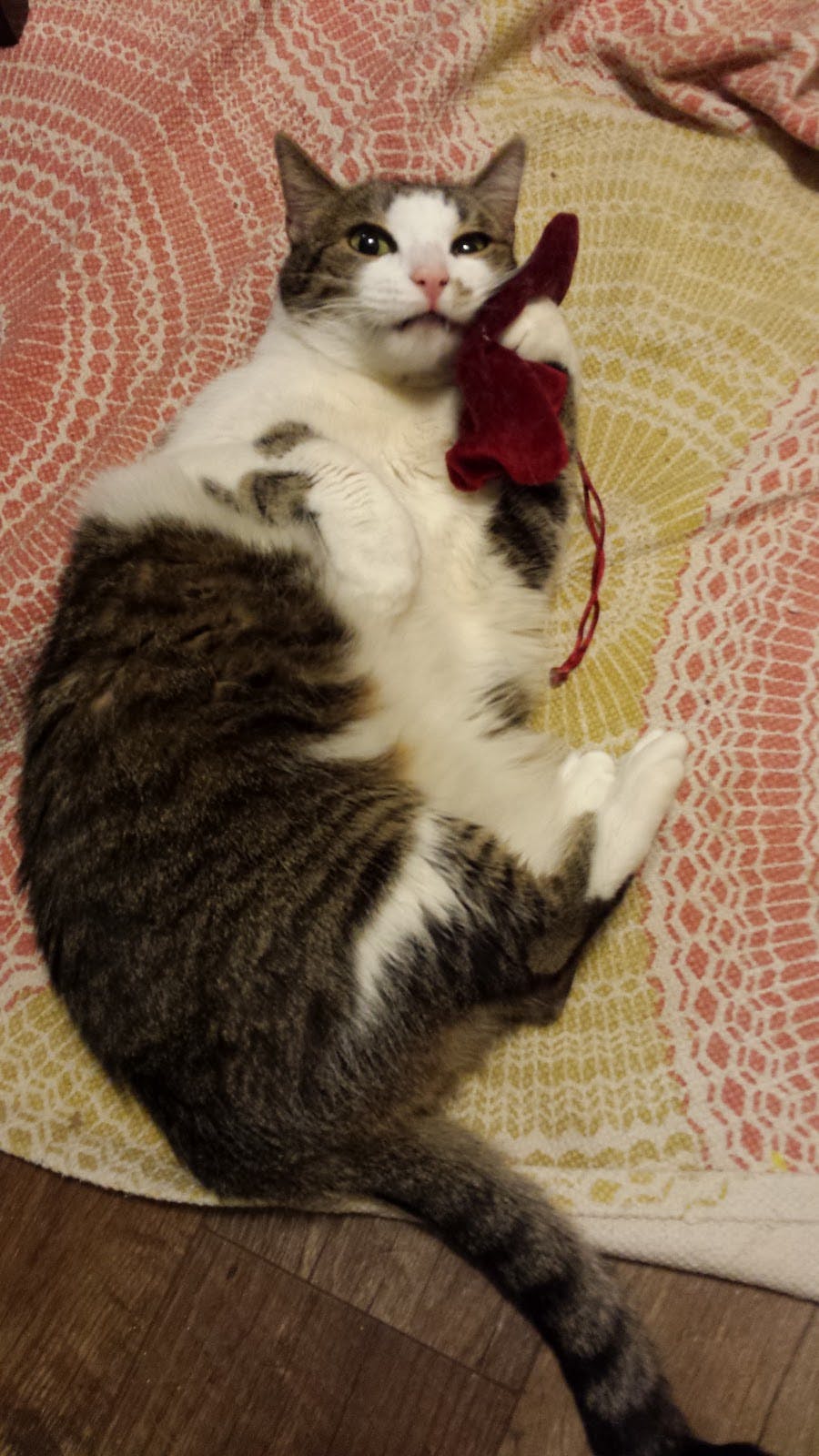 So if, like me, you like to get high but lament the fact that your cats can’t join you, consider giving them the opportunity to transform into the Dionysian starchild you’ve always wanted them to be by purr-chasing some Meowijuana. There’s no guarantee your cat will reach Petey’s heights of ecstasy, but they have a decent chance. Besides, you can always just smoke the stash like the low-standards stoner you are.