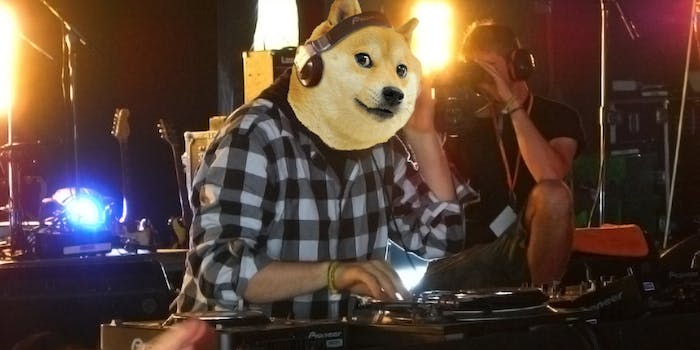 These are the memes of our lives

The Internet is now old enough to tell a story.

The Internet is the most important development of the last 20 years. There has been nothing in modern history that’s been more defining, influential, and ominously integrated than the Web. It makes us laugh, cry, rage, and brood. It has been the subject of more lust, longing, and envy than we could possibly describe, and it’s only getting bigger. It’s part of our way of life now, and unless we witness an apocalypse or something else cataclysmic, that might never change.

The Internet is now old enough to tell a story. It’s divided into a number of eras, much in the same way we talk about history. There’s the prehistoric late ‘90s, the middle ages of the early 2000s, the renaissance of Myspace and other early social media, and our current, fully eclipsed wave of multiplatform content streams. But through all this time, the primary, authentic form of communication on the Internet was the meme: viral videos, images, websites, and everything in between. Meme is an old term, and once upon a time it was used exclusively by the shitheel kids on YTMND and other pre-crossover hubs.

These days, your parents probably know the term meme, just like they know other forum-dweller jargon like “trolling.” But I think it’s interesting that we can explore every single year since the dawn of the Internet and find a dominant meme.

Starting in 1996, I identified a particular slice of virality that summed up that place and time. What can we learn from the things that made us laugh on the Internet now that we’re past the curve? Like sand in the hourglass, so are the Google searches of our lives.

Ground fucking zero. This is where it begins. Kids today probably look at the dancing baby like we look at our grandparents when they tell us they played stickball for fun. The completely inconsequential GIFs of today were the show-stopping entertainment of yesterday.

OK, this is a weak one, because 1997 might as well be before recorded history at this point. What I do know is Clippy debuted in 1997 and I had many conversations about Clippy. But yeah, let’s move on to better memes.

In the late ‘90s, a sixth-grader named Mike Blount took his yearbook photo and uploaded it to a homecooked domain called Hello My Future Girlfriend. It was stupid simple, and entirely void of content save for a heartbreakingly earnest plea for love. The attention to Hello My Future Girlfriend was mostly driven by email and phone calls, which just seems insane now. Years later, Blount made a follow-up video and announced he was gay—the only natural, poetic conclusion to one of the oldest sagas on the Internet.

The first meme I remember my parents showing me. A 45-second clip of an alien singing a Gloria Gaynor song before getting crushed. It was the late ‘90s, Toy Story had just came out, and the possibilities were endless. Ah, the wild west of the Internet, where you could steal audio without worrying about royalties! Good thing we’ve changed, right? Right? Oh, yeah, nevermind.

All Your Base Are Belong to Us barely counts as an authentic form of expression. It was the broken English opening cutscene from Zero Wing, cut and pasted on a very basic Internet. It was early proof that anything—literally anything—could go viral. My only qualm is that “You have no chance to survive make your time” was always a better line.

By my count, this was the first viral video. You couldn’t pull it off of YouTube or DailyMotion. It wasn’t a snapstory. It wasn’t even on Newgrounds. Star Wars Kid, a video of a goofy nerd practicing his lightsaber moves, was found on fucking torrent trackers. We’re talking Napster, Ares, Kazaa, Limewire—the prehistoric era of content aggregation. It’s a minute-and-a-half, but still pretty funny. Star Wars Kid has since spoken out against cyberbullying, even filing a lawsuit against the people who originally uploaded the video. The zeitgeist can take many forms.

Here’s a story you won’t see ever again.

Two mostly anonymous brothers write a children’s book that never gets printed, and instead take their characters to a personal Adobe Flash-based site. Using no advertising or promotion, they build a worldwide following of fans buying into a weekly cartoon set in a profoundly distinct universe. Trogdor, Strong Bad, the Cheat, and the hilarious, pinpoint-accurate adventure games. They kept it running strong for more than a decade until they had kids and started working cool Nickelodeon jobs, but still make time to update the site every once in a while, and returned with a Halloween special last year.

If you’re a kid who didn’t grow up in Homestar’s heyday, you should go explore this back catalog. It’s all free, and remains one of the most fascinating examples of how the Internet can be used for good.

This is some real Internet gangster shit. If you’re authentic, this 144p video of a teenager making his eyebrows dance to a German club song should fill you with fettering nostalgia. Long before the democracy of video-sharing services, the original “Numa Numa” dance was uploaded to Flash sites like Newgrounds and ebaumsworld. It was a simpler time.

I think there was something special about the scarcity of resources back then. Yeah, Numa Numa is unspectacular, but it does capture a charmed bewilderment that you can’t quite find anymore. There’s a lot of talk about how the Internet has sapped our attention span, but in the beginning, I think it taught us to appreciate the simple things.

The first viral video of the modern era, “Lazy Sunday” was a radical idea at the time. Two famous people making a rap song and letting the major network TV footage stream on the Internet for free? YouTube was only a couple months old, so this was a legitimately risky idea!

Of course “Lazy Sunday” blew up, and started an unprecedented run of Internet dominance from the Lonely Island. It also gave rise to a legion of pretenders (and non-pretenders) aping for the throne. As it turns out, a self-delivering video service is perfect for three-minute comedy videos. History is often knotty and nuanced, but I think we can say with remarkable specificity that “Lazy Sunday” changed the comedy landscape forever.

Chuck Norris jokes were never funny, but they do have a special place in the timeline for being the first meme, in my recollection, to garner some crossover success. If you’re like me, you remember most of your time spouting off Chuck Norris facts in the Barrens in World of Warcraft, the sort of hyper-insulated computer life that parents just don’t understand. But before long, some unbearable suits were trying to make a buck. Chuck Norris facts books! Chuck Norris facts daily calendars! Chuck Norris facts coasters! The corporate involvement killed the meme immediately, but it certainly was a sign of things to come.

The first time I got Rickrolled I laughed.

By the time it was getting played at the Thanksgiving Day Parade, I was ready to jump off a bridge. I cannot think of a more perfect distillation of how overexposure ruins everything than the Rickroll. What a sad, disappointing fate.

The last moment I can remember where Kanye was the enemy. These days, the man can do no wrong—socially, culturally, or romantically—but once upon a time he stormed the stage, snagged a microphone from a then-very green Taylor Swift, and the rest is history. Kanye immediately morphed into the biggest pariah in pop media. The funny thing? I think people would be defending Mr. West if this happened today.

Wanna know how far we’ve come in five years? Imagine the public reaction if Bed Intruder happened today. We were once drunk and giddy with remixes and rape jokes. But now? In the shadow of tight racial discourse and cultural justice, I just… I don’t know if this would be funny anymore. If you wonder why there’s heightened sensitivity now, it’s because five years ago HIDE YOUR KIDS HIDE YOUR WIFE was a lol.

I don’t think we can replicate the zeitgeist of “Friday.” In 2015, enough terrible, overproduced music videos are uploaded to YouTube every day that the particular unripe chemistry of Rebecca Black is impossible. We’re so desensitized, and this badness is so common now, that I don’t think the magic is coming back. At least we’ll always have “Yesterday is Thursday, and Saturday comes afterwards.”

Real heads know that the art of the image macro, aka white text superimposed over a static image, was an art perfected by the masturbators on 4chan. Seriously, “Advice Dog” was the original, and that’s been circulating around since at least 2006. The cultural osmosis eventually carries everything away from 4chan to less ornery corners on the Internet (usually with a four-year delayed trigger), so I guess it’s no surprise that before long, Reddit made r/adviceanimals a default subreddit.

God, I hate this shit so much. It’s the Internet’s creativity at its most bankrupt. Oh, the chortled, fake-transgressive LOLs about “RIDICULOUSLY PHOTOGENIC MAN.” I thought we buried this stuff with Chuck Norris.

In recent years, Reddit has removed r/adviceanimals from its starting palette, and it seems that we as a people are finally moving past this. Let’s hope so.

I kinda miss Doge. Don’t you? That shotgun blast of affirmation? How did that dog manage to look so smug? Who added that stupid “e” in the first place? Maybe Doge was never meant to last. He was like a white dwarf, burning twice as bright but only half as long. We’ll always have the Freudian slips, muttering “very wow” under our breath when it feels right.

Kim Kardashian’s giant glistening ass over white words that read “break the Internet.” Once upon a time, memes were happy accidents, oblivious bundles of joy delivered by artists of the moment. They were not planned. They were not engineered. But Paper’s brazen, guaranteed-success cover proved that the machines are taking over. Brilliant, yes. Cynical? Probably. Kardashian’s ass proved that we were all the pawns we swore we’d never become. It robbed the Internet of its innocence, because they knew we’d give it away.

I have it on good authority that when The Dress happened, champagne was popped in the BuzzFeed offices. This global optical illusion did unprecedented traffic. Friends, family, lovers, and enemies sat right next to each other and saw radically different colors in the same picture. This was on the news. A picture of a dress from Tumblr was on the national fucking news. Al Roker told us about what colors he saw. The world is different now.

I’ll remember The Dress not just for the heated debates, but as the moment I knew the Internet would never be the same. This was confirmation that we, as a people, had permanently hooked up our brains to Wi-Fi signals, and there was no going back. The Dress is our singularity.

Photo via bobaliciouslondon (CC BY 2.0) | Remix by Jason Reed