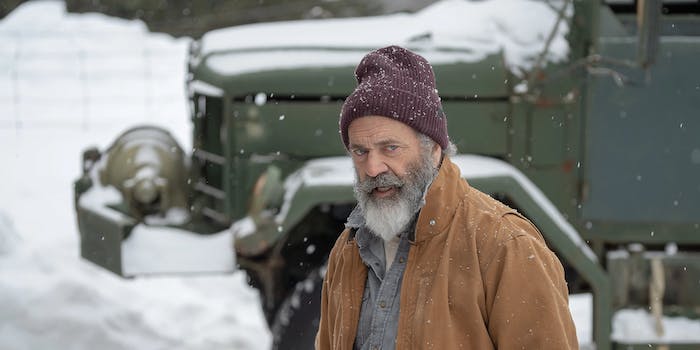 It's the weirdest (and possibly the most offensive) Christmas movie of 2020.

Titled Fatman, it stars Mel Gibson, which is already a dealbreaker for many potential viewers. And the trailer is… well. There’s a reason why it went viral on Thursday night, thanks to a tweet from the Ringer staff writer Claire McNear teasing the film’s bizarre twist: “Have watched this trailer 15 times and still cannot believe it’s real. Nothing can prepare you for the moment you realize what the movie’s about.”

Yes, it’s a gritty-yet-comedic action-thriller starring Mel Gibson… as Santa Claus? A version of Santa Claus who is a murderous badass, and gets targeted for assassination by a child who hires Walton Goggins to kill him? And the movie includes both Christmas elves and homicidal shooting sprees? Well, OK!

With a concept like this, it’s impossible to tell whether this film will be “good” or just so mesmerizingly ridiculous that people watch out of morbid curiosity. Gibson’s presence obviously doesn’t help. If it starred a different actor, Fatman would be an easy contender for 2020’s version of Snakes on a Plane, but the trailer’s popularity has reignited the debate over whether Gibson—a notorious anti-Semite and convicted domestic abuser—should still be appearing in films at all.

There are numerous accounts of Gibson making anti-Semitic comments, including an infamous rant where he said “the Jews are responsible for all the wars in the world,” while he was being arrested for drunk driving in 2006. Throughout the ’90s and 2000s, various reports emerged of him being openly anti-Semitic and homophobic, and in 2010, news outlets published excerpts from an incredibly racist voicemail in which he violently threatened his ex-girlfriend Oksana Grigorieva.

Over the past 25 years, Gibson and his representatives have blamed these outbursts on Gibson’s struggle with alcoholism, stating that he was entering recovery. While he was supposedly blacklisted by mainstream Hollywood for several years, from an outside perspective, it feels like Gibson was repeatedly welcomed back with open arms.

“The fact that Mel Gibson still gets work is proof that there isn’t any kind of ‘woke liberal agenda’ in Hollywood,” @YaGalAlexis tweeted Thursday.

Gibson had a gap in his career between 2006’s Apocalypto and 2010’s Edge of Darkness, but since then, he’s enjoyed plenty of success in the film industry, including widespread acclaim for directing Hacksaw Ridge in 2016. It definitely feels like his “comeback” had more to do with the quality and commercial success of his work, rather than any actual repentance or personal improvement. That’s why the Fatman trailer is more controversial than it appears on the surface. While some people are just excited to see a weirdly edgy Christmas movie, others see it as another undeserved attempt to rehabilitate Gibson’s image.