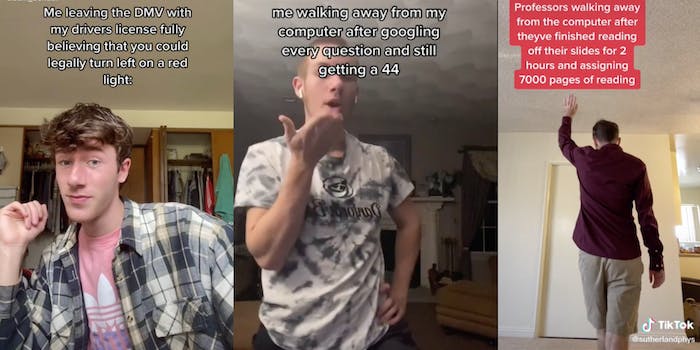 'Sometimes you just need to make a scene when you leave.'

The “Me Leaving” trend is having TikTokers humorously exiting chaotic situations that are going poorly.

It involves users blowing a kiss to the camera and walking away, with a caption that starts with “Me Leaving,” according to Know Your Meme. The videos are soundtracked to a portion of Dua Lipa’s “Blow Your Mind.”

For example, TikTok user @sam_denaer captioned his video: “Me leaving the DMV with my drivers license fully believing that you could legally turn left on a red light:”

The trend also seems to be an extension of the “Muah Challenge,” a TikTok trend that gained popularity on the app back in April. It featured users blowing a kiss to the camera before performing a choreographic, TikTok-style dance. The challenge gained widespread popularity on the app, especially after famous TikTokers such as Addison Rae and Avani Gregg joined in on it.

User @brandonbouley spearheaded the “Me Leaving” trend by using the “Muah Challenge” sound and slightly switching up the format. “Me walking away from my computer after googling every question and still getting a 44,” @brandonbouley’s caption read. His video gained over 1.9 million views in 10 days and inspired other videos with comparable numbers.

User @sutherlandphys, a well-known physics professor on the app, made a similar video with the humorous caption, “Professors walking away from the computer after they’ve finished reading off their slides for 2 hours and assigning 7000 pages of reading.” His video gained 1.8 million views in just 6 days.

“Sometimes you just need to make a scene when you leave,” states the official caption for the trend.