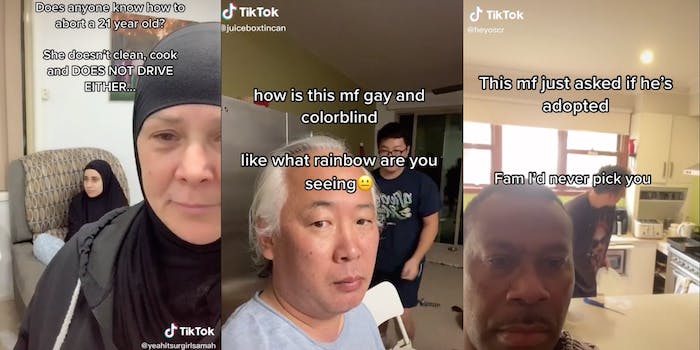 Parents say they wish they had had abortions in TikTok meme

A meme circulating on TikTok this week shows parents roasting their children—and regretting not having abortions. Despite the dark humor, viewers are eating it up.

Justin Lee, aka @juiceboxtincan on TikTok, told the Daily Dot that the trend is just a “hoax” and that kids are asking their parents to film the videos for the sake of humor.

When he first saw the trend on his TikTok For You page, Lee immediately saved the accompanying audio, which has been used in about 25,000 videos. He asked his mother to help him get in on the joke, but she didn’t think it was funny and refused to participate, he said.

So he had his father record the video. Lee captioned it, “How is this mf gay and colorblind. Like what rainbow are you seeing?” The video has received 2.7 million likes since it was posted Sunday.

That’s how the trend works, Lee said. The idea of parents roasting their children appeals widely to younger generations, who often playfully make fun of each other within friend circles.

“It’s nothing harmful, really,” Lee said. “In reality, it’s just the creator themselves making fun of themselves. It’s not actually parents talking to their children like that.”

Many of these video roasts aren’t just friendly jabs or playful insults; the videos show parents saying they wish they had aborted their children.

TikTok user @yeahitsurgirlsamah received 17,000 likes on a video of her mother calling her out with the caption, “Does anyone know how to abort a 21 year old? She doesn’t clean, cook and DOES NOT DRIVE EITHER…”

User @bigherc’s mother “hacked” his TikTok, saying, “This mf forgot to cook rice. Just like I forgot to abort him.” Other TikTok videos showing parents expressing regret for birthing their kids or mocking their own love lives.

Although some viewers might consider the content offensive, Lee said it’s not something to be upset about. He says his parents love him and that he thinks the videos are funny.