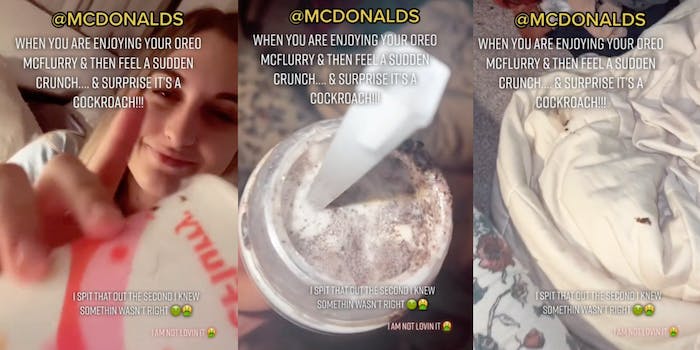 ‘It was like eating a gusher’: TikToker says she ‘crunched’ on cockroach in her McDonald’s McFlurry

'I would burn my mouth off my body.'

A TikTok horror story is turning people off of McDonald’s McFlurry’s for life after a user claimed she found a cockroach in her ice cream treat.

TikTok user @alexacarcione uploaded the upsetting video earlier in the week, detailing her recent experience with a McDonald’s Oreo McFlurry. It’s turning stomachs across the internet, as users question what kinds of extra crunch may have been included in their own fast-food items. The brief clip, easily the most popular on her page, has earned more than 200,000 views and tens of thousands of likes.

The video, fittingly soundtracked by the popular “Oh No” TikTok sound, is simple. It sees Carcione chilling in her bed enjoying her Oreo McFlurry, which she shows off to the camera. A text overlay informs viewers that, while sipping at her ice cream, Carcione felt “a sudden crunch.”

“Surprise, it’s a cockroach,” she wrote.

The video flips to show a patch of oreo-tinted ice cream on Carcione’s comforter, with a disturbing brown shape nearby. Carcione notes, via a second overlay, that she “spit that out the second I knew somethin wasn’t right.”

The brown shape, which Carcione zooms in on, looks quite a bit like a roach. It still has a layer of ice cream and oreo, but what appear to be legs protrude from a flat brown body that appears to have been partially crushed—likely when Carcione inadvertently “crunched” it.

In the comment section, Carcione clarified that she ordered her McFlurry from the McDonald’s near San Diego State University. Viewers couldn’t hold back their disgust at the thought that they may have consumed something similarly upsetting without realizing it. Carcione continued to share details with curious viewers in the comment section.

Her story got worse with every new detail she shared. For one thing, she apparently called the McDonald’s in question to inform them of her extra-crunchy McFlurry and claims the manager simply said: “Thanks for letting me know,” without offering her a refund.

“THANKS FOR THE TRAUMA,” she said in response to this sentiment.

Carcione also claims that she knew something was wrong the minute she “crunched down.”

“It was like eating a gusher,” she wrote. “Pop. Felt like I was chewing on a shrimp shell.”

Carcione says she has since reached out to McDonald’s corporate office in hopes of getting a more adequate response.

In the meantime, viewers are absolutely horrified by her story. Some attempted jokes that “maybe this is the reason they always say the machine is broken,” but most were too upset to crack jokes.

“I think I would pass away,” one user wrote.

“I would burn my mouth off my body but that’s just me,” another agreed.

Carcione says she will “never again” have a McFlurry, and many users seem to be joining her in that camp. Numerous viewers tagged McDonald’s in the comments, demanding a response from the mega-wealthy fast-food chain.

The Daily Dot has reached out to Carcione and McDonald’s.