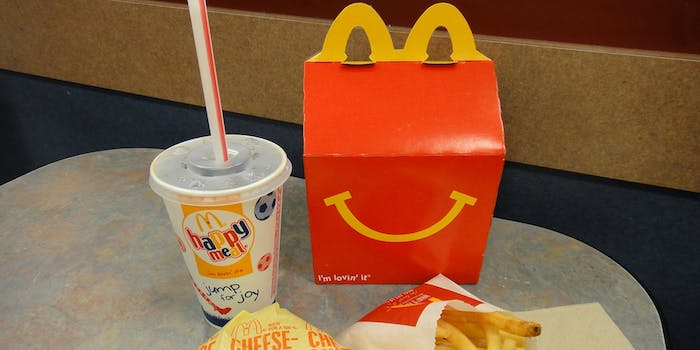 Books that McDonald’s should include with Happy Meals

The pages may get a little greasy.

Listen up, parents: You want your kids to get into the best kindergarten in the tri-county area and be the smartest young scholar at daycare, right? Then get to McDonald’s, because the fast-food chain is temporarily giving away good old-fashioned books instead of Minions toys.

The restaurant’s new Happy Meals will include “one of four books, including the classic Paddington by Michael Bond and illustrated by R. W. Alley.” Youngsters might also get some Valentine’s Day-themed reading, such as Clark the Shark Takes Heart by Bruce Hale, with illustrations by Guy Francis; Happy Valentine’s Day, Mouse! by Laura Numeroff and Felicia Bond; and Pete the Cat: Valentine’s Day Is Cool by Kimberly and James Dean.

It really is a great idea—getting kids back on books in an age when everyone is glued to their screens. And nothing looks better than a paperback sticky with some grease stains french fries.

But since we’re starting down this road, why not challenge the youth of today with something more nuanced than a tale about a displaced bear? We’ve got ideas for books that McDonald’s should serve up next time around.

War and Peace by Leo Tolstoy

Your kid will be a master at ending playground conflict.

They’ll be so terrified of their iPads that they’ll never want to play with technology again.

The Secret by Rhonda Byrne

Lord of the Flies by William Golding

Will teach them valuable survival skills in case they ever end up stranded on an island without McDonald’s.

Honestly, most of us haven’t even read this ourselves, so it’d be great for kids to give us a summary once they’re done skimming.