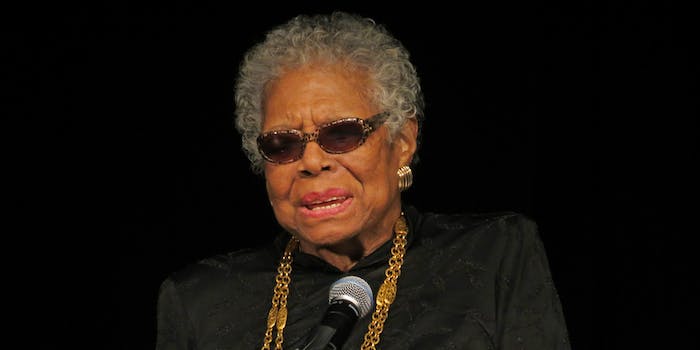 Because of Maya Angelou, I can be

You existed. I and we all can be, and be better. For you existed.

I was 11 years old when I first read I Know Why the Caged Bird Sings by Maya Angelou. It was a difficult period for me. In July of that year, I had reunited with my birthmother, who is white, which prompted the long, brittle atrophy of my sense of self, of belonging, of knowing, of loyalty.

In fact, my birth mother had given me the book as a gift for our first Christmas after meeting. “For Rebecca, Love, Jan” she wrote on the inside flap of the small paperback with the blue and green cover. “This is a book about young black girlhood,” she told me, “It’s important for you to read this.” Like so many of the things my birth mother said to me, particularly on the subject of race, I felt a combination of reverence and resentment.

Although she had given birth to me, and given me away, she had also allowed me back into her life (and not a minute went by that this was not made clear to me—for the first few years of our relationship, I was a guest in her I’ve-moved-on-home), and provided a glimpse into my lineage, as well as a sort of blunt sense of connectivity. But she was also in many ways a poor substitute for what I felt I actually needed—a black woman as my point of origin.

I had no idea how desperate I was for this figure until I started reading Maya Angelou. I absolutely devoured her books. I read Caged Bird, then Gather Together in My Name, and one of my all time favorites, Singin’ and Swingin’ and Gettin’ Merry Like Christmas. Yes, I loved her poetry: “Still I Rise,” “Phenomenal Woman”—how can you not?

But what I loved more, what I saw, felt, and gained access to through her writing across genres was not merely a story of black girlhood, but a paradigm of emotional vigor, intellectual clarity, and a full-on black woman-ness that I hungrily internalized and cherished throughout my childhood and into my adult years.

Of course, her childhood trauma of the rape that rendered her mute for five years, the racism she endured and witnessed in the Jim Crow South, and her family displacement was by no means rosy, as she memorably wrote in Caged Bird: “If growing up is painful for the Southern Black girl, being aware of her displacement is the rust on the razor that threatens the throat.” But my God, if it was not an epically unsentimental testimony of the human spirit—the black human spirit.

While she was known for encouraging love and unity among all different cultures and races and ways of living and being, there was no mistaking the pride she felt in her blackness. She worked with Malcolm X, Martin Luther King, Bayard Rustin, and was active in the Harlem Writers Guild. She appeared in Roots and sang at the Apollo. She traveled to Ghana and counted James Baldwin among her closest friends while he was still alive.

With the posture of a dancer, her signature dark glasses and that deeply resonant, almost sweltering tenor of her voice, watching and listening to her talk or read could feel like a religious experience.

Beyond her influence on me as a black girl and a black woman, her influence on me as a writer has been profound. Her direct, beautiful language—words for which a reader’s approval does not occur, while simultaneously holding that reader in partnership, in this gorgeous togetherness of walking through a narrative experience as if a museum of eloquence. The ability to tell a story with such unshaking truth, universality and transcendence has always made me want to write better, and to write at all.

Years ago, I sent one of her poems to my friend whose daughter had committed suicide. It was a poem called “When Great Trees Fall,” which ends like this:

And when great souls die,?
after a period peace blooms,?
slowly and always
?irregularly.  Spaces fill?
with a kind of?
soothing electric vibration.?
Our senses, restored, never?
to be the same, whisper to us.
They existed.  They existed.?
We can be.  Be and be
better.  For they existed.

Maya Angelou, a great soul indeed, but so much more—because of you, I will welcome the blooming peace and the soothing electric vibration as my senses are restored in the wake of your death. You existed. I and we all can be, and be better. For you existed.