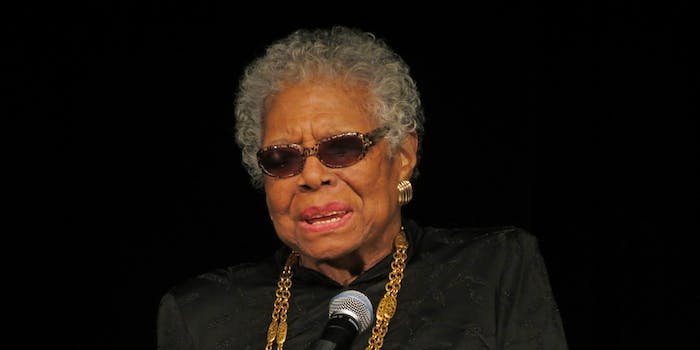 The literary world has lost another one of the greats. Author and poet Maya Angelou has died in Winston-Salem, N.C., this morning. She was 86.

Most famous for her autobiographical book I Know Why the Caged Bird Sings, Angelou was a novelist, celebrated poet, educator, filmmaker, a professor at Wake Forest University, and a civil rights activist. She influenced generations of writers and creators. She was active in politics even in her later years, supporting Hillary Clinton and then Barack Obama in the 2008 presidential election. She received more than 50 honorary degrees in her lifetime.

Her final tweet offers the sort of wisdom people have known to come from her.

People have been sharing quotes and their memories on Twitter.

We’re saddened by the passing of our friend Maya Angelou. Thank you for all you’ve done, and for all the hugs. pic.twitter.com/kmLCN59Uef

I thought I had made it PERFECTLY clear that no one else awesome was allowed to die this year? Quota already exceeded. Damnit, people.

RIP Maya Angelou. I interviewed her in 2007. She took my face in her hands and said, “You are a sweet and dreamy child.”

“If you are always trying to be normal, you will never know how amazing you can be.” Maya Angelou – who was utterly amazing.

maya was somehow the most dignified and the most humble and the most intelligent, but then also the flyest. she’s one of one.

I Know Why the Caged Bird Sings was a truly radical book when it came out in 1969. #MayaAngelou was an ass-kicking revolutionary.