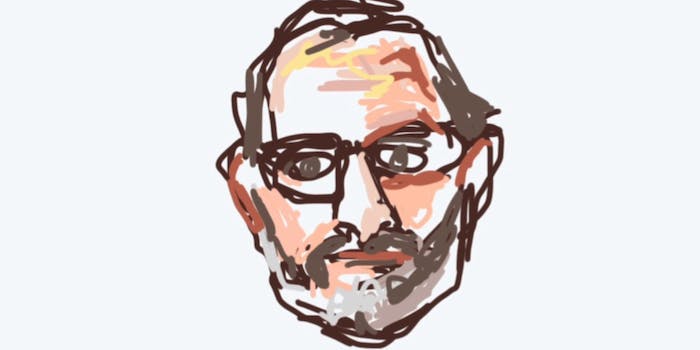 He's not even that mean about it.

Blocked Art World is a new project by artist Matthew Britton (no relation to the author of this article) where he paints the portraits of other artists who have blocked him on Twitter.

According to Britton, he came up with the idea when he noticed that, if you click on the Twitter profile of someone who has blocked you, all you see is their avatar, a sentence saying you are blocked, and a large empty white space that, to him, resembled a blank canvas.

The Daily Dot caught up to Britton via email and here’s what he has to say about this work in progress.

Last we heard you’d only been blocked by one artist. Any updates?

Unfortunately, at present the project is not so much a series but a standalone piece or statement.

Are you actually hoping to be blocked by more artists so you can add to the project?

I think, should the worst happen and I become knowingly blocked by another artist, it’s always good to have a contingency plan and I think producing a portrait would be a fitting reaction.

Is the project limited to artists only or will you do portraits of other Twitter users who block you? For the purposes of this project, are you defining “artist” as visual artist or would you do a portrait of, say, a poet or dancer who blocked you?

I would say the project was initially inspired by being block[ed] by a member of the new media art world, so maybe it should be restricted to that domain.

Golan Levin (@golan) is the one portrait we’ve seen thus far.  Any idea why he blocked you?

I believe it may have happened a year or so ago and was probably down to over-spamming on my part. So there wasn’t any particular malice on both parts. That’s what’s interesting about the notion of being blocked, as it has all sorts of negative connotations, and I wanted to finalise this exchange in a much more positive way.

Do you know if he’s seen your portrait of him?  If so, has he responded in any way?

I’m not sure if he has seen the portrait. I hope he sees the humour in my original intentions.

What has been the general response from your followers and the public about your project?

I think on a whole, the response has been mainly positive. Those that follow my work will recognise its troll-like nature and that it’s a discussion point for a broader social issue.

Sometimes people can take being blocked on Twitter rather personally. Is there a temptation to throw some devil horns or a bad neck tattoo on these portraits?

I like to play on being the bitter downtrodden artist, but I will only paint what I see.

What other projects are you working on?

I’ve been mainly working on a collaborative drawing website called www.PaintByUser.com that lets you draw in real time with strangers over the Internet under the guise of a username.

It looks like at least one person has asked about blocking you just so they can get a portrait. Does that compromise your original idea?

I will not compromise the original concept as it may become contrived.

If I block you can I get a portrait?