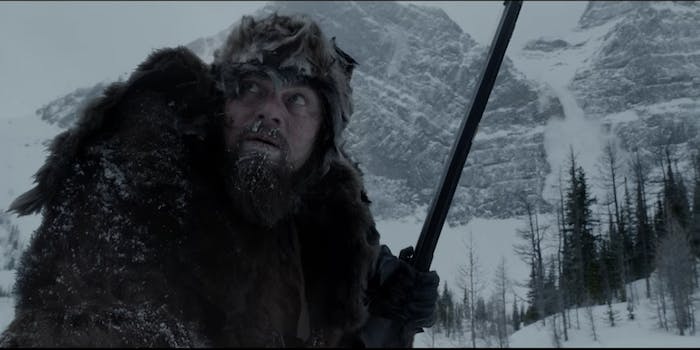 Spoiler alert: No he isn't.

Only seven days after dropping his Twitter bombshell, “America has been arming ISIS,” Matt Drudge issued a stunning dispatch from his eponymous website, the Drudge Report: “DICAPRIO RAPED BY BEAR IN FOX MOVIE.”

Drudge claimed, in a short and sensational post, that audience members at a screening of Alejandro González-Iñárritu’s latest film, The Revenant,“escaped to the exits when the Wolf of Wall Street met the Grizzly of Yellowstone” as “the bear flips Leo over and thrusts and thrusts.”

“‘He is raped—twice!’” a source allegedly told Drudge, adding that Iñárritu takes a page from The Empire Strikes Back and has DiCaprio sleep naked inside of a dead horse’s carcass.

“There is clearly no rape scene with a bear,” a spokesperson for Fox told Entertainment Weekly, explaining that the bear is a mother protecting her cubs. The moment in question can be seen in the film’s trailer at the 0:53 mark.

Drudge’s sensational outburst—one of only two tweets on his Twitter account at the time of this writing—is really indicative of a slow news day. After all, there’s likely nothing going on in Chicago, Paris, Colorado, or the adult film industry.

The conservative news mogul has not yet updated this “Developing” story.

Read the full text below:

The explicit moment from Oscar winning director Alejandro Inarritu [sic] has caused maximum controversy in early screenings. Some in the audience escaped to the exits when the Wolf of Wall Street met the Grizzly of Yellowstone.

The story of rural survivalism and revenge reaches new violent levels for a mainstream film.

Not to be outdone, DiCaprio rips open a horse and sleeps naked in its carcass!

For director Inarritu, ‘BIRDMAN’ was just the appetizer.

FOX has given the movie an award-qualifying release on Christmas Day.

It could not be confirmed whether Drudge was just thinking of an old Onion article, or perhaps this video: