Unfortunately for Damon, no money has yet been collected.

We already know that a ton of people think the movie, The Martian, is based on a true story about an astronaut who was once left behind on Mars.

Thus, it makes perfect sense that somebody named Kyle Douglas N. started a GoFundMe page trying to raise money to rescue Matt Damon— and not his character, Mark Watney—from his outer space purgatory. Some people apparently are worried about Damon’s safety. 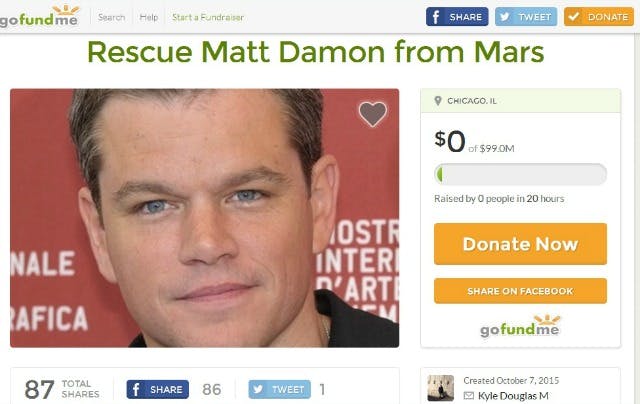 It’s  unfortunate that 20 hours after creating the crowdfunding page, there are still no donations, meaning it might take the length of an actual trip to Mars in order to raise the $99 million that’s been requested.

But as Kyle writes in his description:

One of the greatest actors in Hollywood is currently trapped on Mars after a failed exploration. We need Matt back on earth because he is due to be in another “Bourne” movie. Matt is also a loyal friend to another Hollywood great Ben Affleck who needs Matt Damon’s support as he goes through a divorce. Failing to bring Matt back could be devistating (sic) to our American life and will have a devastating impact on film if we don’t rescue Matt.

At this point, it seems unlikely that enough people are willing to bring Damon back home (after all, there have been three Jason Bourne movies already made). Which is unfortunate, because he’s a great actor and there’s nothing on Mars, except for some newly discovered water, to notice.