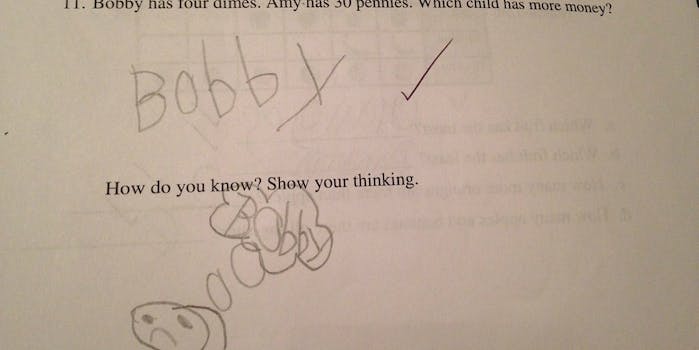 You be you, magnificent 6-year-old.

Everyone who hated having to show their work after correctly answering a test question can relate to the way this first-grader handled it. 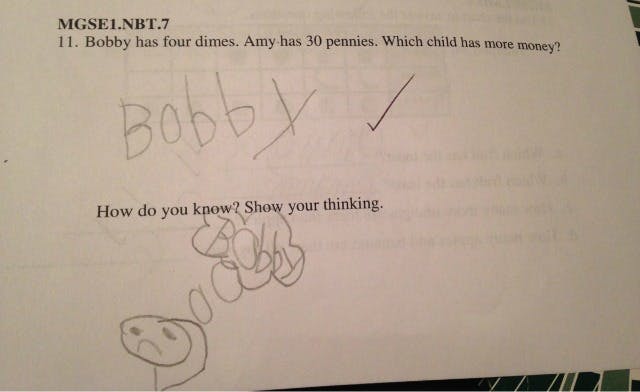 The best part: the drawing of the boy looking sad because he’s been asked to ponder such a silly request. Or as one Imgur commenter wrote, “The illustration shows his deepest emotions, his dark contemplation, loathing of modern education personified by the frowny face…”

When someone asked the boy’s mother if she was proud of her son, she replied, “Obviously.” When asked about her plans for this work of art, she said, “The plan is to hang onto this until he can fully appreciate the humor.”

Here’s to you, unnamed 6-year-old who doesn’t take guff from anybody—especially a nosy math teacher who, like the Amazing Kreskin, absolutely must know what everyone is thinking at all times.

At least she got what she wanted: She knows what he’s thinking, which is that he hates having to follow her every instruction. He’ll respond to her question, all right, but she might not get the answer she was expecting. Instead, it might be an answer that tells her nothing at all.