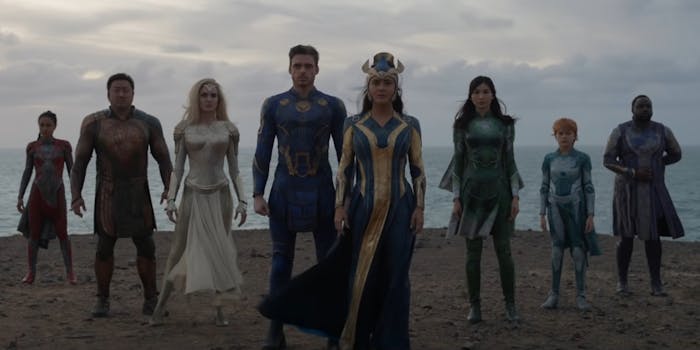 Marvel teases a very different tone in ‘The Eternals’ trailer

It's a true ensemble drama with an epic fantasy tone.

Marvel loves to follow a tried-and-true formula, but the studio clearly wants to promote a fresh tone with The Eternals.

Producer Kevin Feige is keen to hype up the skills of Oscar-winning director Chloé Zhao, emphasizing her technical prowess to a sometimes comical degree. Now, the first trailer gives us a real look at The Eternals… and it does indeed seem different from what came before. Somewhat different, anyway. Visually speaking it’s not actually a big departure from previous Marvel films, shot by the same cinematographer as Age of Ultron and Captain Marvel. However, it does, as promised, feature a lot more scenes shot on location. (At last! The outdoors!)

The story structure does feel new, though. Up until now, every Marvel franchise revolved around an individual hero. The plot was shaped by that character’s powers and emotional journey, leading into crossover events like The Avengers. Meanwhile The Eternals looks like a true ensemble movie: An epic fantasy tale about a community of immortal aliens who lived secretly on earth for millennia.

While typical Marvel trailers lean heavily into action and humor, The Eternals teaser is a slow-build. We learn about the main characters’ background (a familiar riff on Chariots of the Gods-inspired sci-fi/fantasy) and we’re introduced to a central conflict in their lives: should they finally use their powers to interfere in human affairs? We’re also treated to a few cool moments like Kumail Nanjiani’s Bollywood dance sequence, and the immortal love story of Sersi (Gemma Chan) and Ikaris (Richard Madden). But we don’t really get a sense of these characters’ personalities until right at the end, when they sit down for a casual family dinner.

The first Eternals poster also hints at a departure from solo hero-driven storytelling; an atmospheric shot of the entire cast with their faces in shadow.

To be honest, this trailer barely tells us what the film is about, or who the main characters are as people. But thanks to the strength of the Marvel brand, this doesn’t really matter. Fans are already excited, and Disney has six months to release other ads. The main message here is that The Eternals is different. It’s a fantasy movie without the military undertones of many Marvel spinoffs, and it seemingly moves away from a traditional hero/villain structure. It’s also a story about a community who have lived and cooperated together for a long time, a vibe that was sadly missing from the often-contentious tone of the Avengers franchise.