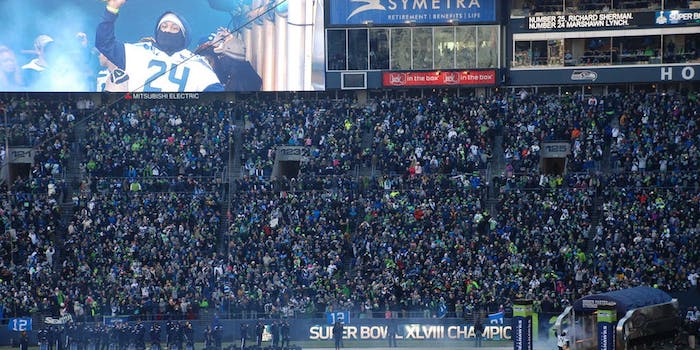 In early August, Seattle Seahawks running back Marshawn Lynch was being investigated by the Bellevue, Washington Police Department for allegations of assault and property damage levied against him by an unnamed women. The Seahawks denied the allegations, calling the charges “bogus,” and two days later, those charges were dropped by Bellevue PD, who proclaimed that Lynch “was not involved in the incident in any way.” And yet, despite the investigation being closed almost two months ago, Seattle-based reporter Amy Clancy of KIRO-7 felt compelled yesterday to release the name, home address, and phone number of the woman who made the allegations on her Twitter account—sparking furor from Seahawks fans who seemed ready to engage in vigilante justice on behalf of Lynch, and outcry from many who felt the woman’s name should not have been released.

Earlier this week, the Bellevue police department released a statement indicating that probable cause existed that the woman in question violated Washington state law by making a false or misleading statement, and that they had forwarded a criminal summons to the Bellevue city attorney, whose choice it would be to prosecute or not. Upon said news breaking, Clancy fired out a (since deleted) tweet that had the first page of Bellevue PD’s probable-cause statement, and a caption that read “Wanna know WHO accused Marshawn Lynch of assault?” The probable-cause document listed the accuser’s name, home address, and home telephone number.

While most Twitter respondents rallied around Clancy’s tweet releasing the accuser’s name, some suggested that Clancy’s release was foolhardy, since it encouraged Lynch supporters to go after the victim. Clancy and Bellevue PD both defended their actions, stating that the accuser’s name was a matter of public record, and thus no crimes had been committed, but KIRO-7 news ended up having Clancy delete her original tweet regardless, and KIRO-7’s news director Jake Milstein issued a tepid statement in response to the station’s actions:

@tifotter @ClancyKIRO7 @KIRO7Seattle we were required by law to release the documents we did, and completed all redactions as required.

The name of anyone investigated for a crime becomes a matter of public record. The public should know this. @tifotter @BvuePD @KIRO7Seattle

Let’s unpack this a bit. Clancy is right, no crime was committed by her actions, or by Bellevue PD, in releasing the victim’s name. But names being a matter of public record, versus being broadcast to a popular local newscaster’s 5,000-plus followers, are two very different beasts. The woman (whose name we won’t release here) is now in a position where all of her public information has been made available to a fan base that could easily mobilize against her, in response to a crime she hasn’t even been charged for. Vigilante justice at its finest.

The alleged case against Lynch came at a time that was intensely fraught for the NFL—the accuser’s August allegations were made just a couple weeks after the NFL suspended Ray Rice for a mere two games in relation to video that had surfaced earlier in the year of him dragging his unconscious then-fiancé Janay Palmer out of an elevator. Since then, domestic violence accusations have been crawling out of the woodwork, which is what makes the release of this false accuser’s name all the more dangerous: At a time when the NFL and its diehard fans could use a victory, trotting out a woman as someone who falsely accused this player is only going to weaken the case for other potential assault victims to come forward. Really, this is when NFL apologists who are trumpeting the need to “hear both sides” before passing judgment on athletes charged with assault should listen to their own advice.

In the case of the allegations made against Lynch, according to the probable-cause document that Clancy tweeted out, the accuser was visibly intoxicated and, while she did meet a black man while heading home from a bar, that man was not Marshawn Lynch, who was staying at a hotel in a different part of Bellevue than where the accuser was. According to report and evidence thus far, the accuser was incorrect. But when looking at the bigger picture, as Slate reported earlier this year, not all accusations of rape and assault that result in charges being dropped were necessarily unfounded. Victims often recant due to a number of societal pressures, and often, as was in the case of Florida State University quarterback Jameis Winston, district attorney’s will choose not to pursue charges, simply because they don’t think they’ll be able to win the case—not necessarily because of a lack of evidence.

Clancy’s actions in sharing the victim’s name may not have been illegal, but they were beyond reckless—especially when you consider that the Bellevue District Attorney has not decided whether to charge the accuser with a crime yet. As one district attorney with a background in prosecuting assault and domestic violence charges told me, “We often don’t pursue charges against false accusers—not just because it’s a hard case to prove, but because we don’t want to deter other assault and abuse victims from coming forward and speaking freely. It’s easier to let one false accuser slide, than prevent many victims from feeling that their story will be taken truthfully and seriously by law enforcement.”

False assault and abuse allegations are incredibly serious, but according to the FBI, only 2 percent of rape allegations are false. Meanwhile, the accuser in question has now been opened up to a world of harassment from angry Seattle Seahawks fans, many of whom have taken to Twitter to castigate her—and that behavior only makes it that much harder for actual victims to come forward, without fear of retribution.

And then there’s the larger question of journalistic ethics: Just because something is a matter of public record, does that mean it should be shared? As many Clancy critics were quick to point out, neither she, nor her employer KIRO-7, have released the details of every public police report on file – this was a particularly juicy story they went after, no doubt largely due to the fact that Lynch is a hometown hero for Seattle fans.

While KIRO-7 can hide behind the greater cause of journalistic transparency here, at the end of the day, they made a massive ethical mistake. They would have still had a story on their hands by tweeting out that the accuser was being investigated and would potentially be charged for her false accusation, but by broadcasting all of her personal information to a very large audience, all they did was invite pitchfork-wielding masses to rain fire upon this woman. Not only have they set up a precedent for future accuser shaming, but they’ve made it infinitely harder for actual victims feel safe coming forward.