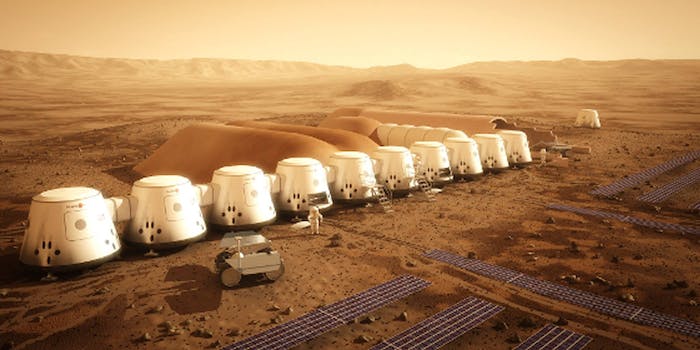 The applicant pool for the Mars One expedition has been narrowed down to 1,058 people.

For over a decade, Dutch entrepreneur Bas Lansdorp has dreamed of establishing the first human colony beyond Earth’s atmosphere. In May 2012, he finally announced his plans to conquer the planet Mars. Roughly 200,000 people applied to be shuttled off to the fourth rock from the sun for Lansdorp’s project, aptly dubbed Mars One. Monday, the pool of applicants was narrowed down to just 1,058 eager explorers.

Mars One isn’t just some five year mission to explore a strange new world. It’s intended to be the first permanent human colony on another planet. Those brave enough to join the project are accepting a one-way, nonrefundable ticket away from the planet Earth.

According to the Mars One website, “Crews of four will depart every two years, starting in 2024. Our first unmanned mission will be launched in 2018.”

Before anyone can board a craft bound for Mars, Lansdorp will have to come up with a way to pay for his extraterrestrial voyage. While many explorers of the past, who’ve sought to expand man’s understanding of the universe, have relied on funding from sources that share a love for science, Lansdorp is focusing on an entirely different motive—entertainment value.

At present, Mars One is currently discussing the possibility of airing his project live on television and using commercial sponsorship to fund his endeavor. As a result, it’s possible the first group of humans to colonize another planet may be reality TV stars.

Lansdorp has also launched an Indiegogo campaign, which in the past few weeks has raised over $100,000 for the purpose of sending a lander to Mars, which will broadcast a livestream from the planet surface. The fundraiser has until January 25 to reach it’s goal of $400,000, although any money raised by the date will still be collected by Mars One.

There are obvious risks in this undertaking, so focusing on the danger is only human nature. However, we should take some comfort in the fact that no human has died in outer space in over 42 years.

Of course, there are a host of other problems that come along with attempting to establish a Martian colony. Aside from that whole no-oxygen thing, it has been suggested that copulation may prove fruitless in the harsh radioactive environments beyond our planet’s atmosphere. According to one NASA researcher, galactic cosmic rays may cause infertility, or serious health problems for any child conceived in deep space.

Another potential problem with the plan: If life does exist on Mars, human interaction may harm it. While it’s far from confirmed, a recent video from the Mars Reconnaissance Orbiter suggests there may be water moving on the planet’s surface. This begs the question, could some form of life be supported within it, and if so, what steps should we take to prevent destroying it while trying to find out?

If you really want to make the trip, there’s still a chance you could wind up on the list. Mars One may take another round of applicants before their mission begins. But, only serious applicants need apply. According to Lansdorp, the goal is “separating those who we feel are physically and mentally adept to become human ambassadors on Mars from those who are obviously taking the mission much less seriously.”

The race to see who can take the first selfie on another planet is officially on.

H/T The Verge / Illustration by Mars One