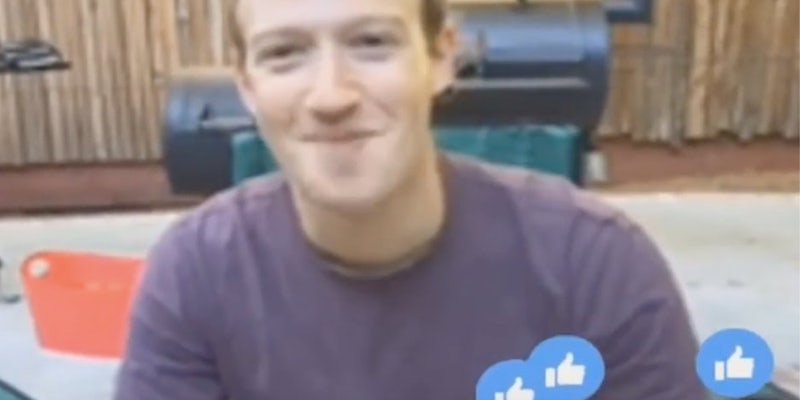 He will never get the Zucc.

Mark Zuckerberg, be-hoodied young symbol of the Silicon Valley establishment, hung out in his backyard on Facebook Live Sunday, racking up millions of views and answering fans’ questions. But Zuck had a question of his own: “What’s up with the whole … ‘zucc’ thing? Z-U-C-C?”

Glad you asked, Mark. What is up with it is this: “zucc” or “zucced” is slang that people—especially people in meme groups—use on your social network, Facebook, to describe the takedown of their content for alleged terms of service violations. Your meme got deleted or your page got suspended? You got zucced.

The spelling of “zucc” derives from the popular “succ” meme, which is basically an elaborate joke about oral sex. “Succ” has a long and proud(ish?) history, which the Daily Dot covered at length last month.

It was a very short jump from “succ” to “zucc,” and now the term is now commonplace on meme pages in revolt against perceived censorship. It’s not surprising that Zuckerberg is unaware of this, because he’s not in the trenches enforcing—or allegedly mis-enforcing—Facebook’s terms himself. But it does say a lot about the efficacy of protests against “zuccing”—they have not made their way to the top.

What does Zuckerberg think of meme page censorship? Apparently, he doesn’t think of it at all.